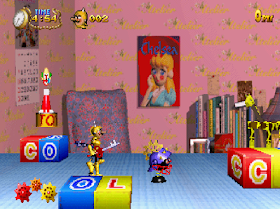 Genre: Action
Perspective: 3rd-person, Side view
Gameplay: Platform
Published by: SEGA of America
Developed by: SEGA Enterprises Ltd.
Released: 1995
Platform: SEGA Saturn
One of the first original projects released by Sega to launch Saturn.
The game stands out for its original visual style, which is a little giving Toy Story, which was released around the same time, as well as supposedly polygonal graphics, which, when viewed near the first, is not used, for the most part it uses the scrolling of 2D sprites, which in part created the effect of three- 2.5D. But the models of bosses are still voluminous, and sometimes the game flaunts CG cutscenes, though short and not voiced, although in the opening and ending the vocal compositions still sound. And at that time it was surprising, and it looked good, today it's already too much to look at such a visual. But the game sounds good still.
According to a simple story and an easy story, you play the role of the clumsy clockwork knight Tongar, in love with the princess of Chelsea's watch, who at midnight singing a magic song awakens toys in a house from a dream, inspiring life in them. But one day she turns out to be stolen by a mysterious force that, in addition, draws many smaller toys to the service of herself, so that they prevent the princess from saving in case of anything. Now, our hero will join forces with his rival Ginger and save Chelsea in whatever it takes.
Gameplay, as you might already have guessed, is a simple platformer. We make our way through the house, which is divided into levels and zones, we fight the enemies with the key, we avoid various traps, we pick up bonuses and find secrets, and at the end of each zone we fight with the boss.
Actually in general, the game is a strong middleweight in the genre. But at the same time it is also a typical launch-title, when the lack of depth in the gameplay and new ideas carefully trying to hide behind the noisy and new-fashioned technical pribludami a new generation of gaming hardware.
‹
›
Home
View web version