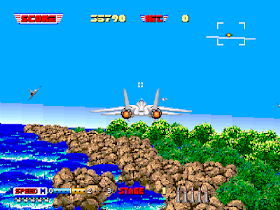 Genre: Action
Perspective: Behind view
Gameplay: Arcade, Shooter
Vehicular: Flight / Aviation
Published by: SEGA Enterprises Ltd.
Developed by: SEGA-AM2 Co.
Released: 1987
Platforms: Arcade Machine, SEGA Genesis / Mega Drive, SEGA 32X
The game runs on the Sega System X arcade board, which, like its predecessors (Space Harrier and OutRun boards), allowed a large number of staggered objects on the screen at the same time due to the graphics techniques coined by the developers of "Super Scaler" . The game also features sprites and background rotation in real-time, a graphic feat for the era in which it was released. In addition, in its Deluxe version, it had a case with motors, which tilted the cockpit sideways, forward, and backward, according to the tilt of the aircraft in the game.
‹
›
Home
View web version