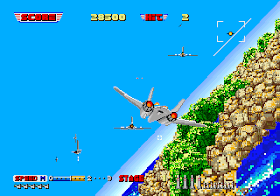 Genre: Action
Perspective: Behind view
Gameplay: Arcade, Shooter
Vehicular: Flight / Aviation
Published by: SEGA of America
Developed by: SEGA Enterprises Ltd.
Released: 1994
Platforms: SEGA 32X, SEGA Genesis / Mega Drive, Arcade Machine
In 1987, thanks to Yu Suzuki came another hit from Sega, more precisely from its division AM2. In place of flat shooters and dull virtual tiram came an energetic and impetuous combat 3D flight simulator, which set a high bar for all subsequent games of this direction. To satisfy all the requirements presented to the arcade action, a special joystick was designed in the form of a helm of a combat aircraft. In addition, some Arcade machines were produced in the format of a vertically rotating cockpit with a pilot seat.
Let me remind you that the revolutionary technology "Super Scaler" Sega has been used in its gaming machines since 1985, in such hits as Hang-On, Space Harrier, OutRun, Thunder Blade and even Night Striker. Specialized hardware allows you to smoothly change the size of sprites, making them "closer" or "next." This achieves a 3D effect that is absolutely not available for gaming consoles 8 and 16 bits in the base configuration.
Pilot will have an American F-14 Tomcat: a jet interceptor and a bomber used by the US Air Force from 1974 to 2006 (to replace the new F-18F). The main task of the fighter is domination in the above-water space, therefore the main landing and take-off place are aircraft carriers, which is clearly demonstrated in the game. But there are enough aboveground missions, in total 18 large, various stages, with a smooth transition from one to another.
Of the weapons in the arsenal of the fighter six-barreled Vulcan cannon with unlimited ammunition and air-to-air missiles - their number is limited, but refuelers periodically replenish them. Not all enemies in the game are dangerous and are resisting properly. Some just fly, waiting to get their portion of lead. And others release missiles, from which it is necessary to evade as quickly as possible, since even one hit is fatal. The flights themselves are impressive, the effect of presence is created, and when you enter the airplane into a series of "barrels", the head starts to spin a little.
The music for the game was written by the composer Hiroshi Kawaguchi and the group S.S.T. Band. Compositions from the game repeatedly entered into various music albums. The main theme remix is ​​present in the game Bayonetta (2009).

After Burner was ported to such gaming systems as: Amiga (a separate game in the Amiga Champions collection), PC (DOS), Amstrad CPC, Atari ST, Sharp X68000, FM Towns, Commodore 64, NES, Sega Master System, Sega Saturn, PC, MSX, ZX Spectrum and Gameboy Advance in the Sega Arcade Gallery. The version for 32X was created by Rutubo Games and is known as After Burner Complete.
The same game can be found in collections of 100% Dynamite for Commodore 64 and ZX Spectrum.
In detail:mSega 32X: Coolest arcade action. A brilliant implementation of the game, demonstrating all the splendor of the add-on to the Sega Genesis / Mega Drive. The fact that the sprites around the edges are more pixelated and the game goes 30 frames per second instead of the original 60 does not really matter. Sorry, the device was not so common. 23 level?
Master System: surprisingly well-ported game. The power of the Z80 is not enough to support the fast-paced gameplay, but otherwise the game is at a very decent level, even the voices are there!
NES: for 8-bit cue game decent, but of course, from the arcade gameplay there is not much left at all! 22 levels.

After Burner became a big hit, but for some reason Sega was not in a hurry to release sequels under this brand. Among the games of the family, not related to the title is: G-LOC: Air Battle and its sequel to Strike Fighter, later re-released as After Burner III for Sega CD. Then there were Sky Target and Sega Strike Fighter, but about them some other time.
In 2006, Sega releases a new sequel on Sega Lindbergh: After Burner Climax. The game is made in the best traditions and later published for Xbox Live Arcade and PSN. In parallel, in 2007, for PSP released branch: After Burner: Black Falcon