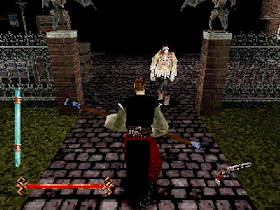 Genre: Action
Perspective: 3rd-person
Gameplay: Arcade, Fighting
Narrative: Horror
Published by: Activision Publishing
Developed by: Kalisto Entertainment SA
Released: 1997
Platforms: PlayStation (PSX, PS1), Nintendo 64 (N64)
At the beginning of the game you have to choose one of the 2 heroes and go with them to adventure in the darkest alleys of 16 different parts of London in 1834. These areas are simply teeming with monsters and other unpleasant types, and they are all the result of Adam Crowley's insane creativity, he is also your main enemy with whom you will meet in the finals. Total bridges are more than 50 varieties, and each has his own way of acting and his level of intelligence. Adam Crowley, the leader of the sinister brotherhood of Hecate, opened the way to the essence of human fears. He raves with the ideas of conquering the world with the help of hell beings who are difficult to imagine even in the most terrible dream. Confronted him are two characters - the monk Ignatius and the adventurer Nadia. The game has an interesting, but not a new idea of ​​"anger" or "adrenaline meter", if you want, in other words, to fight with "monsters" you will without a "lunch break", otherwise the game will end. Also Nightmare Creatures is one of the first action games where an experienced system of opening attacking and defensive techniques was implemented, that is, as you pass, more and more deadly combos will be opened. But besides the hands and feet at your disposal are piercing, cutting, fire and even freezing weapons.
The game is quite fast and difficult in the passage, but fans of the wild action it should certainly like. In addition, it is really awful in content, not once or twice you will invariably flinch from the unknown enemy (s), or sharp sounds, or simply from the sight and size of the monsters that appear before you.