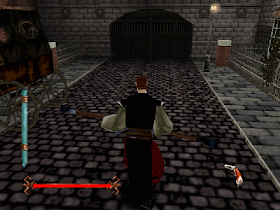 Genre: Action
Perspective: 3rd-person
Gameplay: Arcade, Fighting
Narrative: Horror
Published by: Activision
Developed by: Kalisto Entertainment SA
Released: 1998
Platforms: Nintendo 64 (N64), PlayStation (PSX, PS1)
Nightmare Creatures - the game is extremely interesting, no matter how trite it may sound. And the further you pass, the better you begin to realize it. There are Nightmare Creatures and eerie monsters with remarkable abilities, and original levels with many secrets, and clever tricks with which you can quickly and effectively destroy the enemy. But the thing is that sometimes it's just impossible, or at least it's very difficult to understand what to do next and how to do it. Well, we hope that this detailed guide on the passage of some missions can resolve this problem.

The game begins with the most that neither is an important thing, namely the choice of the character. Of course, with him you will have to make a difficult journey to the end of the game, kill all the monsters and destroy the main villain!
Nadia - a representative of the fair sex (no matter how difficult it is to guess by her name), continuing the tradition of the notorious Lara Croft.
Indeed, she inherited from the famous heroine of Tomb Raider all her main qualities:
and dexterity, and speed of action, and the speed of reaction. Nadi's natural flexibility ensures the implementation of fairly complex techniques, but at the same time it does not differ in particular strength, and in the fight against large monsters should use a somewhat intricate tactics. The most varied echies are her main weapon.
Ignatius Blackward is a knight who leads a life in battles with Evil. The fighting tempered his character and made him a very dangerous opponent for the accomplices of the devil. Its slower movement is not a lack of strength, but a consciousness of one's own superiority.
Which character to choose? The issue is deeply important, but still it is a depot of taste. Therefore, before you start a serious game, try both heroes. In the very process of the game they can not be changed.
‹
›
Home
View web version