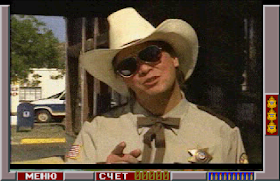 Genre: Action
Perspective: 1st-person
Gameplay: Arcade, Rail Shooter
Art: Full Motion Video (FMV), Video backdrop
Published by: American Laser Games
Developed by: American Laser Games
Released:
Platforms: PlayStation (PSX, PS1), 3DO Interactive Multiplayer, DOS
The player controls an agent of the US Drug Enforcement Administration. His job is to track down a South American drug lord and to stop his illegal drug trafficking completely. In doing so, he must eliminate all opponents.
Just like in Crime Patrol, the player travels through America. He starts in Sierra County, New Mexico, in order to get to South America via Chicago and the border between Mexico and the United States. There he goes in search of the residence of the drug lord. At each location the player has to perform three missions. Only when they are terminated successfully does it travel to the next location. The story ends when the drug lord was eliminated.
‹
›
Home
View web version