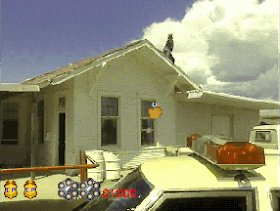 Genre: Action
Perspective: 1st-person
Art: Full Motion Video (FMV), Video backdrop
Gameplay: Arcade, Rail Shooter
Published by: American Laser Games
Developed by: American Laser Games
Released: 1995
Platforms: 3DO Interactive Multiplayer, PlayStation (PSX, PS1), DOS
Wars, police shootings, all sorts of firing for any reason - that's the bread of the company AMERICAN LASER GAMES. Because on this field, perhaps, the creation of thousands of all-different minisotshetikov with the use of firearms, which is ideal for the production of such interactive movies that are so beloved by this firm - shooters.
And now, without departing from the cash register of long-established traditions, AMERICAN LASER GAMES took another step toward universal activation ... but a step dashing: DRUG WARS, in my opinion, the best product of the company in the last few years. In it you will feel yourself an active and full-fledged actor of a harsh police fighter with a somewhat naive storyline, but - a bunch of action, competent special effects, and the best video I saw in ALG works.
So, CRIME PATROL 2. For a second, the never-ending war between the police and the drug mafia began its new turn in connection with the change of leadership. Now the criminal syndicate is headed by a Latin American figure, who has quite a lot of experience in handling such cases. The people devoted to him in response to the mass arrests of members of the organization committed bloody lawlessness in the streets of the city. Chaos and general panic, riots, robbery, looting and a lot of human casualties. Only a special police squad can prevent this.
It means - only you. Personally. Four hefty levels filled with action to the limit; The shooting of criminal elements, the release of hostages and the salvation of ordinary citizens from the attempt on their lives (among the citizens, by the way, there is a judge), car chases are not without a firing, and prochii and prochiya, up to storming the fortress Baron, Colombia, or something like that.
Beautifully put special effects, a lot, I repeat: CUP! Continuous action, and an excellent sound road put the game above all other works of AMERICAN LASER GAMES, and elevate it to the rank of almost even a masterpiece. I will not be afraid of this word. All.

A or R is the fire
clamped B - accelerates cursor movement twice
clamped C - accelerates the movement of the cursor four times
X - call the main menu
The weapon shoots while the cartridges remain in the drum shown at the bottom of the screen. When the weapon is discharged, lower the cursor down-the weapon will turn to the ground. Now press A or R, and both reels will be recharged.
‹
›
Home
View web version