The Crow: City of Angels (PS1) 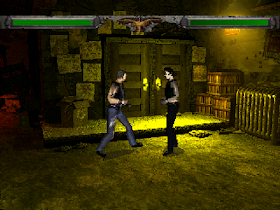 Genre: Action
Perspective: 3rd-person
Gameplay: Arcade
Setting: Cyberpunk / Dark Sci-Fi
Published by: Acclaim Entertainment
Developed by: Gray Matter Inc.
Released: 1996
Platform: PlayStation (PSX, PS1)
The game is based on the movie of the same name, it introduces you to a guy named Ashe, who rose from the grave in order to take revenge on the offenders who killed him and his girlfriend. This prehistory is followed by a 3D game, abundantly adorned with various pribambachami game - destruction (battle). As for the spirit of this game, it smells worse than rotting tuna, toasting in the midday sun! The main character, as well as other characters, often have to think about it, while they walk across the screen from side to side, as if they are all Charlie Chaplin clones. The space of the game is filled with disheartening yellow-black shadows of obviously unhealthy origin, which, ironically, did not reach their goal to convey the atmosphere of the identical film play. The only positive thing that will meet you here is a four-on-one attack involving local thugs. With them, you can sort out with kicks, good punches or, using improperly selected bottles or baseball bats. I think it's impossible for anyone to define this game as entertaining. But that is not all! Remember how in the games Alone in the Dark 2 and City of the Lost Children, the "smart" camera led you, diving into different streets, just when you did not want it at all? So, she returned with a vengeance in The Crow: City of Angels, and, thanks to her, there is such a confusion in your head that everything is going around.

Access the Continue Option from the Title Screen. The ''Enter Password'' option will appear. Now you can enter any of these codes:
‹
›
Home
View web version