The City of Lost Children (PS1) 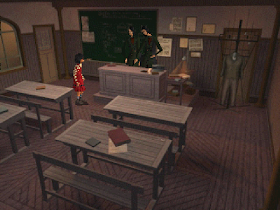 Genre: Adventure
Perspective: 3rd-person
Gameplay: Graphic Adventure, Puzzle elements
Visual: Cinematic camera
Setting: Cyberpunk / Dark Sci-Fi
Published by: Psygnosis Limited
Developed by: Psygnosis Limited
Released: 1997
Platforms: PlayStation (PSX, PS1), DOS
Near the harbor impregnated with dampness and shrouded in a foggy gloomy City of Lost Children, in a castle on the seashore there is a scientist-maniac called Krank, prematurely aged due to a complete inability to sleep. By order of Krank his assistants - Cyclops kidnap the children and drag them into a gloomy laboratory where the villain scientist turns their dreams into their own. But because of the terrible fear of his children, he only sees their nightmares. In search of the missing younger brother in the City comes the circus strongman One. He is helped by the brave nine-year-old girl Miette. The City Of Lost Children is created on the motives of the surreal French film Jean-Pierre Junet and Mark Caro with the same name. Karo participated in creating the game helping to create a horrible atmosphere for the developers of the city and its surroundings.

Let's start with a short description of the main characters that you will have to meet during the adventure.

Warning: We offer you a "full solution", but we advise you to contact him only if you are at a dead end. Otherwise, it's easy to spoil all the fun of the game.

01. Ask Pieuvre about the robbery of the cashier's hut. Go out the door before they throw you into the basement.
02. On the street, talk to the old scoundrel Pelade, and he will give you the key to the cashier's hut.
03. At the end of the yard, go to the right on the hanging bridge.
04. Down the slope and around - to the stairs. True, this is the only way.
05. After going down the stairs, go left past them along the coastal path.
06. Pick up the brush to the right of the boxes under the steps.
07. Return to the right, past the steps and exit to the right side of the screen.
08. Go down the aisle - the staircase on the right is blocked.
09. Go around the water along the aisle. You can not climb a higher transition.
10. Pass by the hut of the cashier and the watchman. Do not pay attention to them (yet).
11. Go along the crossing to the right and around the corner.
12. Go to the other side, to the right and down the stairs.
13. Climb the boxes (from the back) and take a metal bar there.
14. Run along the pier (no matter which side), until you reach the lighted house.
15. When you get to the house, throw the metal bar on the control panel.
16. As soon as the light goes out, hide behind the yellow barrel to the right of the house. Hide from Watchman.
17. Return to the Cashier shack and use the key to open the door.
18. Entering the shack, use the switch above the door so that everything can be seen.
19. Use the brush to "clean" the open cash register and remove the "electricity" from the cupboard.
20. You can take money from the buffet.

21. The alarm signal worked, but One slammed the watchman to help slip away Miette.
22. Returning to the classroom, you will find out that your next search is to find a safe shark-moneylender.
23. Take a bag of marble balls from the shelf before panic rises.
24. Turn right and open the kitchen door.
25. Talk to the boy Boule, tell us what you are looking for, get very useful "keys".
26. Exchange marble balls for tincture, which he just cooked. Then go away.
27. Give the medicine Pelade, which will drink it and immediately fall asleep.
28. Turn the button at the bottom of the stairs to tilt the basket.
29. From the basket take a sausage and a doorknob.
30. Climb the stairs and open the door to the shack with the door handle.
31. Press the switch next to the door - it will become noticeably lighter.
32. Look around and open the door to the yard with a key (it's next to the bed).
33. Return to the courtyard. Give the dog a sausage (otherwise it will puff up and wake Pelade).
34. Open the "yard" key to the door to the right of the eastern chute.
35. Exit through the door and go down the stairs to the other side.
36. Go left and talk to the guard. He will not let you pass.
37. Return to the right, past the steps, along the shore, until you reach the end.
38. Talk to the person who is repairing the car. Then pull the forceps away while it is fiddling with the engine.
39. Bite off the bell with forceps (on the wall behind him), take the bell with you.
40. Return to the guard and ring his bell over his ear.
41. On the stairs, ring the bell - it will turn into an idiot. Flare into the water. And now you can climb the stairs and enter the room.
42. Entering the room, take the mini-safe from the table.
43. Stand on the small safe to open the big one.
44. Take the green gem from the safe. Now to the door, to the exit.
45. At the exit of Miette, two Cyclops are grabbed, but the passing Diver releases it.
Part Three - Submarina
46. ​​Miette wakes up on a submarine, she has lost all her "property".
47. Take a piece of the board behind the drawers and old ropes.
48. Press the switch and "press" it with a wreck of the board.
49. Turn off the siren of the audible alarm (switch on the right) and throw the key into the jar near the bed
50. Now take the Airlock-key (air lock) from the shelf above the bed, then listen to the delirious nightmares (in the dream) of the Diver - you learn a lot about Dr. Crank!
51. Climb up the boxes and look into the periscope.
52. Looking at the shore, you will see the children who are loaded into the boat. Now you understand what is happening.
53. Use the Airlock-key to open the door and exit.
54. Fail into the "air castle" - go to the left and get out on the deck.
55. Take the lighter and - on the ladder to the top.
56. On the transitions and stairs (around the water) and upward.
57. Climb the box to climb over the wall - jump from the boxes to the other side.
58. Take the scissors from the table under the corrugated tin lid.
59. Take the white candle from the lower right corner of the yard.
60. Put the candle on the table and light it.
61. The candle flame will burn the rope, the box will crash down into the hatch.
62. When a woman comes in to find out what happened - Miette will slip through the door.
63. She will meet One in the bar, Miette "will make her legs".
64. Rising from the bar - to the left to the city gates.
65. Turn around and walk past the large storage doors. Exit to the left side of the screen.
66. Talk to the person painting the boat. When he moves to the right, take the brush.
67. As soon as you grab the brush, put it in the jar so it becomes covered with paint.
68. Climb the stairs (near the boat) and across the bridge.
69. Take an empty tin can near the bridge.
70. On the passage around the courtyard, and then to the right.
71. Talk to the Chinese tattoo artist. If you try to take a picture - nothing happens.
72. Take the atomiser at the end of the yard.
73. Go back downstairs and climb up the large doors.
74. Go straight down to the docks along the street lit by street lamps.
75. Now to the left past the double staircase, to the pier.
76. Brush with paint "blind" guard. He will start to rush like crazy and fall into the water.
77. Approach the edge of the pier. Talk to the fisherman. Give him an empty jar. He will tell you about the map and the Chinese tattoo artist. 78. Now to the right and down the right ladder to the pier.
79. Talk to One in a rowing boat and take a stick at the end of the berth.
80. Go back up the stairs, find the exit at the back of the screen. Walk around the corner.
81. Talk to the man - he will tell you about his deadly fleas! Break the glass with your stick.
82. Now turn the handle of the hurdy-gurdy so that the fleas attack the "master."
83. Destroy the fleas "atomizer" directly on the man and take his wrist compass.
84. Return to the tattoo artist. Pull out the screw from the left side of his "stall" and the stand will fall on his head!
85. Now you can take a card (We hope you are proud of yourself!).
86. Go back to One and give him a map and a compass!
87. One and Miette sail to the sea, to the station where children are hiding.
88. Miette takes the children to the boat and they sail to the shore.
‹
›
Home
View web version