The City of Lost Children (DOS) 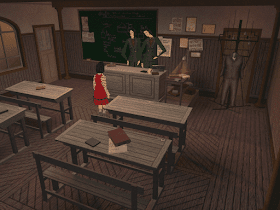 Genre: Adventure
Perspective: 3rd-person
Visual: Cinematic camera
Gameplay: Graphic adventure, Puzzle elements
Setting: Cyberpunk / dark sci-fi, Steampunk
Published by: Psygnosis Limited
Developed by: Psygnosis Limited
Released: 1997
Platforms: DOS, PlayStation (PSX, PS1)
Wonderful French quest from the third person.
There are probably a lot of players who don't really like games based on movies, and in most cases I agree with them. But now before you - one of the few exceptions.
In this seemingly childish game, you play as Miette, a 12-year-old girl who helps her friend, circus athlete One, rescue his younger brother Denree. And he got into trouble: the evil scientist Dr. Krank, who has forgotten how to dream, kidnaps children with a developed imagination in order to steal dreams from children with the help of a terrible machine. And these children must be saved.
Yes, it's like a child's game. Yes, it's not very difficult. But in it there is a unique atmosphere of some kindness, warmth, and at the same time - a hidden tragedy. After all, the huge strongman Oun, heartbroken, is powerless against the treachery of the evil scientist, and his only hope is a little brave girl, alone in this frightening, dangerous world capable of challenging evil...
The gameplay is quite standard for games of this kind - riddles, traps, useful items, a small number of characters, a few dialogues... But, as already noted, this is not the value of the game. And she is by no means a child.
In general, if you miss a really good, unusual and, despite the gloomy plot, surprisingly kind quest - this is the game for you.
‹
›
Home
View web version