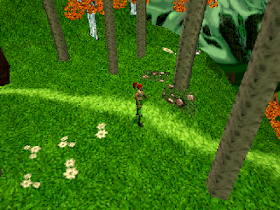 Genre: Action
Perspective: Side view
Visual: 2D scrolling
Gameplay: Platform, Puzzle elements
Interface: Direct Control
Setting: Fantasy
Published by: BMG Interactive Entertainment
Developed by: Crystal Dynamics, Toys for Bob Inc.
Released: 1997
Platform: PlayStation (PSX, PS1)
The second series of games is close enough to the original, but it changed outwardly very noticeably. The action takes place in the same world, but at first glance it does not tell. The joyful sparkling graphics of the original disappeared, and the gloomy world of the psychic "species" arose. The two main characters Nikki and Fargus also changed noticeably. Fargus "aged", and Nikki significantly changed appearance.
In the Pandemonium! 2 whole 19 stages, not counting the hidden and bonus zones. Like the first part, the game is based on 2D side-scrolling graphics in combination with a stereo camera, which together create the illusion of 3D space. And quite a decent illusion.
Before each stage you have to make a choice: play for Fargus or for Nikki, as everyone has unique abilities that can help or hinder the passage of the stage. Fargus has excellent attacks in the fall (as in the original), but now he can still throw Sid'a (head on a stick) and manage it when searching for coins and treasures previously unavailable. And his jumps became noticeably better and higher. Nikki remained virtually unchanged, and her excellent double jump was preserved. Both characters have now acquired new abilities, learned to climb on ropes, walk on their hands and, what is very important, climb on ledges. Well, just like Lara Croft of Tomb Rider. This creates many interesting situations, especially when passing through difficult stages. There is where to practice your brains, because in many stages you can find out something like puzzles and riddles. For example, to open a passage to one room, you need to push the switch completely into the other. And this technique is often found in the game. So you will not only practice your fingers! The show is conducted in a very energetic manner, light effects very successfully illuminate hard-to-reach places. In general, the game is not bad and worthy of attention.

What can you find on the road?