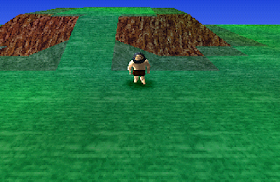 Genre: Action, Simulation
Perspective: 3rd-person
Gameplay: Life / Social Simulation
Interface: Multiple Units / Characters Control
Narrative: Survival
Setting: Prehistoric
Published by: Artdink Corporation
Developed by: Artdink Corporation
Released: 1996
Platform: PlayStation (PSX, PS1)
The word "unusual" probably best describes this development of the company Artdink (however this company has been encouraging, or puzzling, the players with its unusual projects that extend the capabilities of a particular genre) for years. In Tail Of The Sun you play the role of the leader of the tribe of primitive cavemen. And as a leader, you survey the surrounding areas in search of food, repel attacks of evil prehistoric beasts and contribute to the survival and development of the tribe. During the game, you must closely monitor your "Body Status"; on this depends the ability to run, jump, swim, explain and think that your hero is absolutely necessary. At a certain stage of the game your tribe will "acquire" religion, religious symbols, tattoos on the body, etc. These mystical symbols will be tattooed on your hero, which will noticeably change his capabilities. Your heroic deeds and work days will be painted on the walls of the cave by the most talented prehistoric artist; there will be many drawings - you will see them on the screen.
But the tribe has a great goal (besides eating, sleeping and continuing the race) - to fold the tower from the tusks of the mammoths to the Sun and grab it by the tail! However, this is not an easy task (and not because the sun is high and hot), but because mammoths are more and more dull and not religious, they do not recognize ideas and do not want to part with tusks. We have to kill them, well at least we managed to design a suitable weapon, and the hunting brigades under your leadership create.
Of course, the idea of grabbing the Sun by the tail may not like everyone (like "green" or simply environmentalists), but this original game will undoubtedly give you great pleasure.