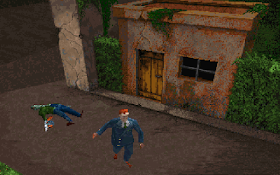 Genre: Action
Perspective: 3rd-person
Visual: Cinematic camera
Gameplay: Puzzle elements, Survival Horror
Setting: Interwar
Narrative: Detective / Mystery, Horror
Published by: Infogrames Europe SA
Developed by: Infogrames Europe SA
Released: 1996
Platforms: PlayStation (PSX, PS1), 3DO Interactive Multiplayer, DOS
If the unusual atmosphere of the original was due to the injection of a sense of claustrophobia and the use of a gothic composition, then in Alone in the Dark 2, which is three times longer, exciting adventures take place in the garden labyrinths and ghostly galleys.
California, 1924. Private detective Edward Carnaby tries to find his assistant Ted Stryker, who disappeared during the investigation of the abduction of eight-year-old Grace Sander. A long enough video intro reproduces the Sticker invasion into the Devil's Kitchen - a huge castle located on the steep cliffs of the Pacific coast. Its owner is One-Eye Jack - a pirate and a smuggler suspected of kidnapping Grace. Stryker finds Grace in a gloomy bedroom, rushes to her, hugs, but then suddenly comes to life, the eerie doll ...
You are more audacious than Sticker, trying to sneak imperceptibly, penetrating the castle grounds. The gates exploded to you fly into small pieces, and you are confidently marching forward, and immediately the visual means of the game are fascinating. The image of Carnaby and all his opponents is much more detailed than in Alone in the Dark, and the leader himself looks more proportionate and well dressed in an elegant blue suit.
First, in order to cope with the patrolling zombie territory, you only have a gun, but after you shoot this villain, you can get hold of Thompson's machine, which will take some time. Soon the desire to shoot any scoundrel, appearing at a distance of 15 meters from you, becomes familiar. Skillful accurate shooting is very important, because, despite the large number of puzzles, Alone in the Dark 2, basically, is focused on armed clashes. The enemy has a fierce and swift guard, chasing you around the castle, shooting and shouting threats. Details and characters are written out extremely accurately. Some characters even stop to reload the weapon, performing it very realistically. This gives you a few valuable extra seconds in order to completely fill them with lead. If you run out of bullets, you can use your fists, arms and legs, although it's better to use swords (if they are).
Since the focus is on armed clashes, in Alone in the Dark 2, in comparison with the first game, there are significantly more pictures taken with a conventional camera and fewer "artificial" species. This, however, does not mean that this game is inferior to the original in the visual series.
The huge gardens, where the first part of your adventures take place, favorably differ from the gloomy premises of the first game. Watching how Carnaby rushes through labyrinths and courtyards, and hearing the echo and crunch of gravel under the guards' feet, the sound of a rechargeable Carnaby gun, watering the pursuers with a stream of hot lead, one can not help but note the great possibilities and high quality of the game.
In the house, your attention is captured by the interior architecture and interior details. In beautifully created characters, many small details are used - from swaying hoods of emaciated cooks to ballet drunken guards (give them another whiskey). In one particularly exciting fight, there are two well-aimed marksmen-gangsters, dressed in long long coats and great-hat hats. Gangsters even laugh, aiming at playing cards and demonstrating human emotions, despite the fact that it's quite clear - it's humanoid automata.
Throughout the adventure there are playing cards - a reminder of the addiction of One-Eye Jack to gambling. They hint at secret dungeons and form their own monstrous 3D games: one way to reflect the character of Jack with the help of the decoration of the house.
The puzzles in the game are often confusing, but always physically logical. The key to solving a problem can usually be found in several frames. Thanks to the user-friendly interface, relatively complex maneuvers become simple. Although some may be annoyed by the linear structure of the game - you can go one way, but the absence of distracting situations in solving some complex puzzles can only be welcomed. The main incentive is to get to all the mythical, action-filled places, especially the old galley, the Flying Dutchman, which only the most skillful adventurers can manage. "