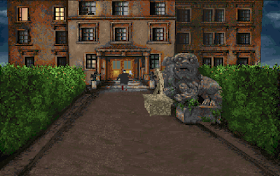 Genre: Action
Perspective: 3rd-person
Visual: Cinematic camera
Gameplay: Puzzle elements, Survival Horror
Setting: Interwar
Narrative: Detective / Mystery, Horror
Published by: Interplay Productions
Developed by: Infogrames Europe SA
Released: 1995
Platforms: 3DO Interactive Multiplayer, PlayStation (PSX, PS1), DOS
You are Detective Edward Carnby, and your reputation as a researcher of the whole otherworldly has made you famous. Life became very comfortable, while the detective continued to relax in the plush armchair of his office, but the rest did not last long.
California, 1924. Suddenly, a request comes for help from an old friend of Ted Stryker who disappeared while investigating the abduction of eight-year-old Grace Saunders. The girl was kidnapped when she returned home from school, and her parents are desperate to pay any money to see her again. Almost certainly it is known that she is kept in an old mansion, known as the Devil's Kitchen. Its owner is One-Eyed Jack Pirate, the leader of the criminal group and a smuggler.
On the move, dressing a jacket and hat, you quickly scrolled in the head of all possible dangers - bloodthirsty gangsters, deadly pirates and evil smugglers. "This little girl needs my help, and she must get out of there alive," you remembered yourself going out into the night. again one and again in the dark.
If the unusual atmosphere of the original arises from the influx of a sense of claustrophobia and the use of a gothic composition, then in Alone in the Dark 2, which is three times longer, exciting adventures take place in the garden labyrinths and ghost galleries.
Gameplay
The gameplay of the second part is quite different from the gameplay of the first part. Puzzles have become much smaller, and shootouts are much greater. But this did not stop the players from enjoying the game.

Also, as a weapon, you can use a bottle of rum, a sword, a punch, etc.

The start menu prompts you to start a new game (the first line) or continue the previously saved (second line).
L or R - call up the main menu, consisting, from top to bottom, of the items: "return to the game", "save the game" (you will need to select one of the three save areas or refuse to save with the C key), "load previously saved game" , "Turn on / off music", "enable - turn off sound effects", "exit (end the game)"
B - call the auxiliary menu consisting of three panels. The upper one contains the "Action" item and lists all the items you have. Clicking on the "Action", you can, but choose, "fight" -bear or "push" - push, move, etc. To perform the selected action, click A. After selecting the item with the item, you can "use" - use it, "drop / put" - put or perform other actions possible for this item
C - running. exit from the sub-menu.