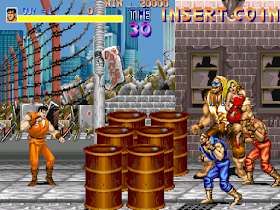 Genre: Action
Perspective: Side view
Visual: 2D scrolling
Gameplay: Beat 'em up / Brawler
Published by: Capcom Co.
Developed by: Capcom Co.
Released: 1989
Platforms: Arcade Machine, SEGA CD / Mega-CD, Super Nintendo (SNES)
This beat'em up is no worse than Cadillacs and Dinosaurs. The plot of the game is simple: the girl was kidnapped and three men came out to save her: Haggar (father), Cody (lover) and Guy (Cody's friend). To achieve their goal in the course are various materials: knives, pieces of metal, as well as their fists, which they do well. The deeper you go the more difficult it becomes, the enemies become bigger, the vitality and intellect of which increases significantly. Each boss in the game is individual and the strategy of the struggle must be constantly changed, adapting to each. Fans of beat'em up should like.
‹
›
Home
View web version