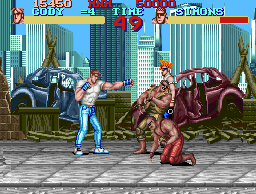 Genre: Action
Perspective: Side view
Gameplay: Beat'em up / Brawler
Visual: 2D scrolling
Published by: Capcom
Developed by: Capcom
Released: 1991
Platforms: Super Nintendo (SNES), Arcade Machine, SEGA CD / Mega-CD
Cult series Beat-Em-Up from Сapcom, which has lived much longer than its rival no less famous series Streets of Rage on Mega Drive'e. The last game was seen on the GBA. Before this series many times tried to pull to a decent level in 3D. We tried to translate the series into a fighting game for Sega Saturn and made a separate project on the PlayStation 2, which excited many generations of former gamers. No more significant projects were and probably are not foreseen. Anyway, the characters were not particularly upset - they collected things and moved to their new home, the world-famous Street Fighter series, where they existed there for quite some time, except for the pitching of Haggar, who still probably sits on his chair Mayor in Metro City, and looks through the window to the quiet streets of his city, where crime once flourished. To fight with it, he went out more than once and dispersed the gang with the help of his powerful body, formidable kind and devoted friends, and earned himself peace and prosperity for himself, his city and its inhabitants. Let's hope that this is not forever, and the city will again be seized by uncontrolled crime, which can only be suppressed with the help of brute force and the characters of the series will once again converge on the dangerous streets of the city, where they will give all possible syndicates their Final Fight. There is nothing to say about this game. This part is just a port from the arcade and its degradation is very noticeable. First of all, the characters for some reason divided into two different games. Here there is Cody, in another game - respectively Guy. Further worse graphics and music. So getting acquainted with this game on an amateur, but the independent projects Final Fight 2 and Final Fight 3 swing is and should be. The third part, maybe for some, is the best game of the legendary series.
‹
›
Home
View web version