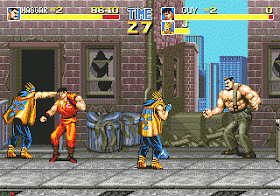 Genre: Action
Perspective: Side view
Gameplay: Beat'em up / Brawler
Visual: 2D scrolling
Published by: SEGA of America
Developed by: Capcom
Released: 1993
Platforms: SEGA CD / Mega-CD, Arcade Machine, Super Nintendo (SNES)
Cult series Beat-Em-Up'ov from Сapcom, which lived much longer than its rival - no less famous series Streets of Rage on Sega Genesis.
Metropolitan City is perhaps the most criminal city in the world. And in this dangerous city ruled by some gang of Mad Gear. Residents can no longer tolerate the antics of bandits. And then there was an obstacle for Madmen in the form of newly elected Mayor Mike Haggar, a former street fighter. He promises to cleanse the city of "dirt" with his own hands. But the criminals, obviously fearing for themselves, kidnapped the daughter of the mayor - Jessica and threaten to kill her if Haggar does not fulfill certain conditions. Now we must hurry - and show these evil people the last battle!
By the way, the young man Jessica - Cody and the ninja Guy will be able to help you in a difficult business. At the beginning of the game you choose who to play for. Everyone has his own characteristics and spetsudary. The Ninja is a bit weaker than the others, but it's fast! Haggar is the strongest, but slow. As you guessed, Cody is the most balanced character. Players can take advantage of bottom-up bonuses (in the form of different weapons, etc.)
The version is very similar to SNES (but nothing was removed from it, unlike SNES). There was also a release for South Korea.
‹
›
Home
View web version