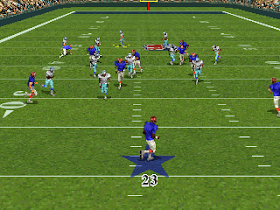 Genre: Sports
Perspective: Bird's-eye view
Visual: 2D scrolling
Sport: Football (American)
Published by: Electronic Arts
Developed by: High Score Productions
Released: 1994
Platform: 3DO Interactive Multiplayer
The game John Madden Football is an excellent simulator of American football, it's rugby for the game console 3DO Interactive Multiplayer. The game is named after the legendary football player John Madden, who later became a commentator. The most important thing is that the game not only uses the name of a famous person to advertise the product, but also he personally consulted developers from EA Sports. So, that the game deservedly bears his name. In addition, and it turned out at a fairly high level with quite a lot of settings and different modes. The graphics in the game are happy with a realistic and helps to plunge into the atmosphere of the game.
‹
›
Home
View web version