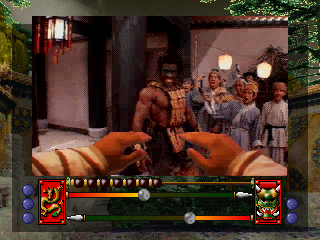 Switch "NVRAM Storage" to Shared and restart emulator. Before swap CD, save state to file, next CD, upload save state file, restart emulator.
Genre: Action
Perspective: 1st-person
Gameplay: Fighting, Quick Time Events (QTEs)
Narrative: Martial arts
Art: Full Motion Video (FMV)
Published by: Digital Pictures
Developed by: Digital Pictures
Released: 1994
Platform: 3DO Interactive Multiplayer
Prior to Supreme Warrior for me, the concept of fighting was associated with the Legendary Mortal Kombat, Killer Instinct, Street Fighter. It would seem well, what else can you think of? what innovations to make? However, the company Digital Pictures decided to move away from the classic gameplay of the above games and as a result the creation of Supreme Warrior was released in the year 94.
You can safely say that as the original and most interesting fighting game the game was a success. Prior to the classics of the Supreme Warrior genre, of course, there is no way to play together, the scripted scenes and the opponent's behavior on the screen deprive the game of unpredictability and any strategic component.
It is necessary to pay tribute to Digital pictures in the game a good storyline is presented, and the atmosphere of China of the 16th century is beautifully recreated. It should also be noted that the game presents a first-class cast. Vivian Wu, Richard Norton, Chuck Jeffries and others starred in the games and the game episodes themselves. (Vivian Woo - Yu Jin our escort, Richard Norton - Warlord Land Chuck Jeffries - Warlord Fire).
You - the owner of a mysterious mask is more accurate than half. The second half is in the evil Fang-Tu who passionately wants to enslave the Celestial Empire and in general all that is possible. Getting to the village in which the main events unfold, you immediately find themselves in the center of a boiling scuffle between the Fang-Tu minions and the local population. Fang-Tu suspects that half of the mask is at his old teacher and is doing this massacre. Finding that the mask is not Fang - Tu warns that if the mask he does not soon, he will destroy all the villagers. You will learn all this from the title clip of the game.
And the essence of the game is to give jazz to the unresolved Warlords Fang-Tu and of course to himself. All those who need to tap on the face of twelve.
1 Master (Fang - Tu) 2 - siblings whose names are left behind. Warlord Earth's 2nd bodyguards Stone and Ambrosia, Fire Warlord 2nd bodyguards of Juk San and Chung, Wind Warlord 2nd bodyguards of Swei Jin and Chao Yen.
You should pay special attention to the principle of combat: All fights take place with a first-person view. It is difficult to adapt at first, so it's worth starting with the Apprentice mode. In this mode, hints are given when, where, and what to beat. Total strokes 5: a blow with the hand (right and left), a punch in the face, a punch in the chest, a kick of the leg (right and left), kick with the kick. Also there are super hits that we gain by killing each warlord Fang-Tu (in game 3): The Buddha Palm (a series of punches), The Leopard Strike (a series of kicks), The Phoenix Eye (a series of punches and kicks). Note that super strokes are only available at a certain point and each beating is preceded by a specific beep (Sound of stumbling stones - Buddha Palm, Very incomprehensible sound - Leopard Strike, Sound of wind - Phoenix Eye).
Defeating every bodyguard, we receive special prizes that we can use later to temporarily improve our characteristics. By defeating each warlord, we get a super strike that can then be used effectively.

These tricks should be taken away from the warlords. I must say that this is difficult and I have not yet taken one. The process of getting these tricks is as follows: When using Warlord trick, we must quickly use one of the prizes received from bodyguards. It is VERY IMPORTANT not to get the damage from the trick that Warlord uses on us. You need to get ahead of him and use your prize in time. Below is a list of prizes that are used to obtain tricks:
The game has 3 levels of difficulty: Apprentice, Master, Supreme. Playing at the level of Apprentice you get clues in the form of icons flickering on the screen. These tips tell you when and what to strike the enemy. There are also sound signals indicating the moment of a super kick or trick.
What happens at the Master and Supreme levels can only be called beating babies. Here there are no tips, deign to calculate everything yourself. Of course, I achieved some results at the Supreme level, but all this thanks to the scriptedness of the clips and the repetitions that already just crashed into the memory. Therefore, those who want to play at more difficult levels one tip: Remember the behavior of the opponent before each blow playing at the level of Apprentice, then we begin to apply the memory stored at other levels of complexity. I very much hope that after the game ends at the Supreme level, we are not given another ending (and the ending seems to be different - this is said about many websites) otherwise the game will not be completely passed by the majority.
In conclusion, I would like to note that the game Supreme Warrior - separately standing in the series of fighting games a little diluted with role-playing elements (pumping the hero (receiving super strokes from warlords) and all sorts of prizes improving our characteristics). The game stands apart in the fighting section, but the very features of the game itself limit it. The video stream does not allow the game to develop in non-standard frames, it does not create intrigue. And of course what kind of fighting can be like that without playing together. Therefore, I personally regard the game as a stand-alone product that is executed on a solid 5-ku (video, plot, acting, invited famous actors, original combat system, the possibility of using bonuses to improve performance). I wish all a successful game and immersion in the pleasant and uneasy atmosphere of China in the 16th century.
‹
›
Home
View web version