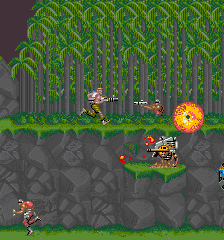 Genre: Action
Perspective: Behind view, Side view
Visual: 2D scrolling, Fixed / Flip-screen
Gameplay: Platform, Shooter
Interface: Direct Control
Published by: Nintendo of America
Developed by: Konami
Released: 1987
Platforms: Arcade machine, Nintendo (NES), MSX
In 1987 Konami released the game Contra (American and Japanese versions, the European version - Gryzor), which became the progenitor of a whole series of games and set the standards for the run-and-gun genre. The game quickly gained popularity due to the excellent graphic and musical component and thoughtful gameplay.
In Contra, the player (or two players) is assigned the role of the special forces of Bill Raiser and Lance Bin, who oppose the alien threat and the terrorist organization Red Falcon. In the course of carrying out their mission, they will have to pass many places, such as jungles and snow fields, man-made bases and fight with numerous enemies and bosses.
In Contra 10 different levels, most of which have a side view and scrolling from left to right. In one of the levels (Waterfall) you need to climb up. But there are two branched pseudo-3D levels (Bases) and differing in the gameplay of the battle with the bosses of the bases. The last 4 levels are combined, and the sign of the end of the level is the change of backgrounds and melodies.
Each level is different from the rest, not only as a theme, but also as a set of dangers: after relatively safe jungles (where one can even hide from enemies under water) and the first base, the heroes have to overcome many dangers, among them the grenades flying from behind trees, escaping from pipes of flame, presses with thorns - and, finally, to fight with alien invaders.
The gameplay in the game is quite simple: in levels with a side view, the hero can aim in eight main directions (with shooting at intermediate angles) and jump, making a somersault in the jump (later it will become one of the main features of the series). In pseudo-3D levels, the hero shoots only in front of him, but can shoot from standing, lying and jumping. The passage of the bases takes a certain time, for which it is necessary to turn off the electrical barriers and find the right way. During the battle with the bosses of the bases, the gameplay is more approximate to the levels with a side view.
The main feature of the game (and subsequently - the entire series) was the difficulty. The hero could withstand only one contact with the enemy or another danger, after which life and weapons were lost. Since the beginning of the game, the player has been given several lives (their number depends on the settings), while additional lives could be earned for points. After losing all the lives the game could be continued, having paid the money. It is interesting that both the loss of life and the use of the continuation did not lead to a restart of the level - the game continued from the same moment. Another feature of the game was the opportunity to play 2 players at the same time.
Also in the game there are several levels of difficulty. With the increase in the level of complexity in the game, the number of enemies increases, the speed of their movement and the frequency of attacks increase. At the highest level of difficulty in the Jungle even a new kind of enemies appears: divers who jump out of the water and try to slaughter the player from the lower platforms.
And one more feature of the game - the presence of many references to the popular at the time of the release of the films: the main characters outwardly resemble Datch from the movie "Predator" and Rambo from the film "Rambo: First Blood Part II", and their names are based on the names of actors from the movie "Aliens" : Bill Paxton, Paul Reiser, Lance Henriksen, Michael Biehn.
In addition, creatures very similar to others appear in the final level of the game.

The proposed set of various weapons, suitable for different situations, optimally fit into the game. Starting the game with a rifle, the player can get various bonuses by punching special containers or flying capsules:
Machine Gun, denoted by a weapon icon - a machine gun, fires continuous bursts;
Fireball Gun (F) - a fiery weapon, shoots fireballs flying in a spiral;
Spread Gun (S) - a fshotgun, shoots five fanning shells. This weapon became the calling card of the series;
Laser Gun, denoted by a weapon icon - a laser rifle, shoots long rays, causing large damage to enemies;
Rapid Fire (R) - increases the rate of fire;
Barrier (B) is a shield that protects a player from enemies for some time.
These weapons appeared later in almost all subsequent parts.

In 2633 a meteorite fell on the Gulag Archipelago. After some time, the archipelago was captured by the terrorist organization "Red Falcon", which seeks world domination. Two soldiers - Bill Reiser and Lance Bean were sent to neutralize the terrorist threat. In the course of the operation, it was revealed that Red Falcon is associated with extraterrestrial entities that arrived to Earth on a meteorite. As a result, the enemy was destroyed.
‹
›
Home
View web version