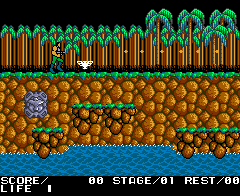 Genre: Action
Perspective: Behind view, Side view
Visual: 2D scrolling, Fixed / Flip-screen
Gameplay: Platform, Shooter
Interface: Direct Control
Published by: Konami Industry Co.
Developed by: Konami Industry Co.
Released: 1989
Platforms: MSX, Nintendo (NES), Arcade Machine
The first CONTRA. It is the most, only it is modified due to lack of resources for this gaming computer. Levels and bosses are approximately the same, but here the terrain decently differs from the one we saw before. Do not worry, if you're a fan, play yourself how much you can!
‹
›
Home
View web version