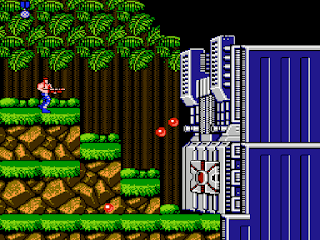 Genre: Action
Perspective: Behind view, Side view
Visual: 2D scrolling
Gameplay: Platform, Shooter
Interface: Direct Control.
Setting: Sci-Fi / Futuristic, South America
Published by: Konami
Developed by: Konami Industry
Released: 1988
Platforms: Nintendo (NES), Arcade Machine, MSX
It's hard to find a game that would come on the NES with Arcade machines and splendor not inferior to the original. Timeless, everyone's favorite Contra - just a unique case. Contra - the game genre "run and gun", where we have to move through the levels and shoot the enemy. You can play alone or with a friend (hence the impression of passing at times increase). The action takes place in 2631. Two soldiers, Bill and Lance fighting against the terrorist organization "Red Falcon". Do your heroes have a wide range of weapons (from machine to lasers), but it is best to use a gun, shoot loose bullets. Besides the usual stages from the side there is also a level where we storm the enemy base with a view from behind. The Japanese version, Gryzor, significantly higher than the US: it is much better sound, more animation and story scenes. Truly Contra - shooter of all time.

At different levels of the game, the following types of weapons are hidden: M - machine guns, S - shotgun shooting in five directions, L - laser, F - fire. If you pick up the letter R, then the rate of fire of your weapon will increase.

The bottom of the variant of passing the first part of the way: the first - hiding in the water near the shore, while losing maneuverability, the second - the rapid passage of the shore with shooting around the moving, but you become the target for snipers. At the beginning of the stage you can find the first prize. It is on the shore in the hatch, which opens and closes (all subsequent prizes are hidden in the same way). The bridge to the islet will explode in front of you, so jump through it with great speed. Shoot down the flying prize S (shotgun, firing in five directions). With it, destroy quick-firing cannons. The entrance to the first base is guarded by a sniper and a grenade launcher. During the battle, stay away from the entrance, and the shells of the grenade launchers will not reach you.

The crystal locks hanging on the base door (central battle machine), shoot from afar. To save yourself from the bullets and grenades of the enemy, go to the floor (button Down). In a battle with a fighting machine that emits poisonous bubbles, destroy first the left and then the right launchers. Then take the center.

The main thing is to get the S prize, which is in the middle of the climb. The shotgun will help to eliminate guns that shoot through horizontally moving stones. These stones need to move past the rapid flow of water. In the battle with the mechanical dragon, first destroy the limbs, then head. Here, using the prizes F (flamethrowers) and S, fire on the balls flying from the mouth of the dragon

There are the same obstacles as on the first base, but from the second door there are invisible locks, which are revealed during the explosion. In the battle with the four brains of the combat vehicle, note that at the moment of pairing they are practically safe and vulnerable.

Rapid cannon, mounted on ice, destroy, shooting in a jump. In three flying barrels there are prizes R, S and a special prize - a bomb that explodes all the enemies on the screen. After seeing the snow-removing machines, immediately run back and open a powerful fire from any weapon. With the spacecraft you can handle with the help of the prize S.

To overcome the vertical laser, before the abyss, descend to the lowest level of the level and stand at the very edge of the abyss. Then the laser beam will fly out at regular intervals, which will allow you to find the moment to jump to the other end of the abyss. Robot-killer, throwing flying saucers, can be defused. Jump through the plates and through the robot itself, remembering to shoot at it.

The main danger is pincers. Watch them and calculate the algorithm of their work. Enter the entrance to the den of strangers before the first volley of the enemy.

The monster's multi-eyed head is vulnerable when his mouth is closed. With the final monster it's easier to deal with, if at first to destroy all the alien generation capsules.
‹
›
Home
View web version