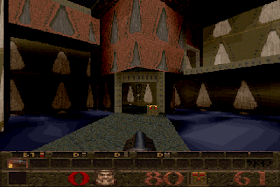 Genre: Action, FPS
Perspective: 1st-person
Gameplay: Shooter
Interface: Direct Control
Published by: SEGA of America
Developed by: id Software
Released: 1997
Platforms: SEGA Saturn, Nintendo 64 (N64), DOS
Quake is a cult shooter in the first person. This game has made a breakthrough in 3D technology due to the use of textured polygonal models.
It all begins with the fact that the government is developing a prototype teleportation gate "Slipgate". Your main goal is to survive for 28 levels. All levels are grouped into 4 episodes, each of which is a separate dimension. To travel through the measurements just need a teleport gate. In Quake, you are waiting for battles with ogres, piranhas, death knights and other enemies.

Pause the game and then highlight the given choice on the Options menu and enter the following code as quickly as possible. When a code is accepted, a confirmation message flashes at the centre of the screen, behind the Options menu. Some cheats require you to stand in a particular area on a particular level or to have collected certain items, these are noted where appropriate.
All Weapons - Highlight "Customize Controls" and enter XYZLRXYZRL.
Full Health - Highlight "Customize Controls" and enter YYZYYZLRLR.
Level Select (You either need all four runes or be standing on the right hand side of the flat part of the bridge over the lava in "Entrance"). - Highlight "Reset to Defaults" and enter RLXYZRLXYZ.
‹
›
Home
View web version