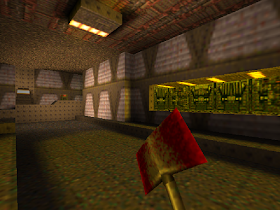 Genre: Action, FPS
Perspective: 1st-person
Gameplay: Shooter
Interface: Direct Control
Published by: Midway Games
Developed by: id Software
Released: 1998
Platforms: Nintendo 64 (N64), SEGA Saturn, DOS
Port of the same game with a PC on the Nintendo 64. An unknown enemy, code-named "Quake" attacked the government base, where experiments were conducted in the field of teleportation, and where there was also a working prototype of a teleportator code-named Slipgate. Using this prototype, Quake began the invasion, sending his army to our world. The main character is to perform the operation "Counterstrike", in order to stop the plans of Quake, while sending to the next world all the Quake minions who will meet on the hero's way. Visually the game is not much different from the original on the PC - the same textures, the same 3D models of enemies / objects, although the textures are a little vague (but this is due to the capabilities of the console, and to the detriment of the game it does not go). The sound also corresponds to the PC version. The music here is different - the creators of music for the PC version of Nine Inch Nails did not participate in the creation of the soundtrack for the N64 version, and therefore the music here is something like an orchestral one, but the atmosphere is no worse than the music of Trent Reznor. Management here is fine, although the first attempt of the game may seem inconvenient. The gameplay here is simple - "Kill everything that moves and wants to kill you." At the same time, you need to find keys, open them with closed doors, traverse traps, and get to the exit level. True, unlike the previous series of shooters id software - Doom, Quake extends the player's freedom of action: you can look up and down, jump, swim. Also, the game has a famous item of increasing the power of weapons in 4 times - Quad Damage, which looks like the first letter of the name of the game. However, there are differences from the PC version - now there is no very basic level, where you can choose the complexity and the episode, now this should be done in the main menu of the game. After choosing a difficulty level, the game follows from the beginning to the end. Next, the game does not have all the levels from the PC version - because of the size of the cartridge they did not hit the game. However, in Quake 64 there is a deathmatch mode - you can fight in the "against each other" mode. It was this regime that brought the game well-deserved fame and fame. The game is a legend of the genre of "first person shooter", both on PC and on N64, so it is recommended to all fans of games of this genre!
‹
›
Home
View web version