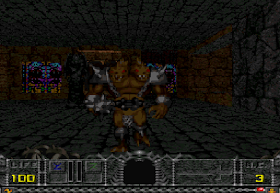 Genre: Action, FPS
Perspective: 1st-person
Gameplay: Shooter
Interface: Direct control
Setting: Fantasy
Published by: GT Interactive Software Corp.
Developed by: id Software
Released: 1997
Platforms: PlayStation (PSX, PS1), DOS
Feature of the game Hexen is a unique combination of elements of steep Doom like a corridor thriller with magic and magic, characteristic for role-playing games. Choosing a character from three possible options: a monk, warrior or magician, you go on a dangerous journey through the expanses of the magical world, to the limit filled with creatures of darkness. Each of your characters has its own set of weapons and spells, which is replenished during the game itself. Despite the great idea, the developers clearly did not improve the graphics and sound. In some cases, the slow motion of the characters and the roughly traced image just start to irritate. As well as the triviality of sound effects, the whole gamut of which consists of screams, sighs - oh, sniffing and grunting. Not enough for those harsh and bloody events that unfold before you on the screen!
A few words about management. It is thought out and convenient. But there are several points here, which should be stopped. Passing on the run on narrow sections or jumping on space limited in space, do not forget about inertia, otherwise you will constantly lose lives in these places.
After reading the last two paragraphs, you might think that Hexen is not the game to be hunted for. Discard these thoughts. Everything that was critically said about graphics and sound is more than compensated by the exciting action. And besides Hexen is not just an action, it's a game where you need to move your brains thinking how to get out of this or that situation.

In the options menu, select Pad Configure and on the controller screen, hold R2 and press Right, Down, Right, Triangle, X. If you did everything right, hear the sound. Now start the game and pause to access the cheat menu to select God mode, weapons, keys, etc.
‹
›
Home
View web version