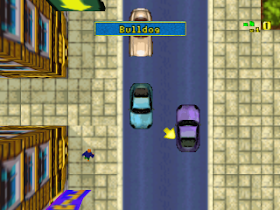 Genre: Action, Racing / Driving
Perspective: Top-down
Visual: 2D scrolling
Narrative: Crime
Published by: Take-Two Interactive Software
Developed by: DMA Design Limited
Released: 1997
Platforms: PlayStation (PSX, PS1), Game Boy Color (GBC), DOS, Game Boy Advance (GBA)
Identify the genre of the game Grand Theft Auto is very difficult. At first glance, this is a strategic "action" of ordinary races on micromachines in an isometric projection. But then it turns out that someone is chasing you, and you collect bonuses and shoot - in front of you an arcade. And only by playing enough time, you understand that the GTA is something more. GTA continues the thought, which was first said aloud to the creators of Dungeon Keeper: "Be bad!". You get into a modern city and are free to do whatever you want there. Choose any car, throw it onto the pavement of its owner (you are a criminal, it's already impossible to take the path of correction) - and go! To go to the next level you need to earn a certain number of points. How you will do it depends on you. You can perform tasks of the mafia, you can steal and sell cars, you can kill everyone around. You can choose a mission, throw it halfway and do something more interesting - everything is determined only by your desire. You live in the world of GTA and decide what and when to do it.