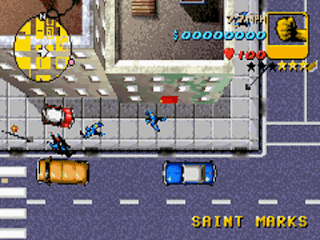 The game takes place in Liberty City, a fictional metropolis that is also the setting for many other games in the series. Early announcements of the game announced that GTA Advance would be a port of GTA III, but during development (the exact timing of the decision is unknown) this idea was rejected, possibly due to the technical limitations of the console and the lack of time required to transfer game missions to a 2D environment. ...
As a result, the game was released as a prehistory for GTA III, the action time is a year before the events of the third part. Since the plot takes place in Liberty City, in GTA Advance, the player travels to familiar places, made in the typical urban style of the series. However, the location of various secrets of the game, such as "Rampages", or the hidden packages and jumps, have been changed, so players familiar with Liberty City will need to explore the world of the game again. The three islands on which the city is located have undergone some changes, and all elements that could not be implemented in a 2D game were eliminated, which is why there are no slopes, tunnels and subways in GTA Advance.

year 2000. Mike is a petty criminal working with Vinnie's partner. Together they want to leave Liberty City and return to normal life, leaving the criminal world, but suddenly, before leaving, Vinnie offers to complete the tasks of the Leone Mafia. During one of the missions, Vinnie's car explodes along with Vinnie himself and their money. Mike, for whom Vinnie was the second father, sets himself the task of revenge.
His retribution leads to his transfer to other organizations such as the Yardies, the Colombians, and the Yakuza. Each gang has its own factions, representatives, enemies and allies, such as 8-Ball (with him, Claude will escape on the Callahan Bridge) and Vinnie's friend Steve, who will give Mike tasks to help find out the truth about Vinnie's death.
By the end of the game, Mike learns that Vinnie faked his death, and accidentally kills Vinnie in a fit of rage when he learns that Vinnie is still alive and framed him. During the last missions, 8-Ball will be traumatized and arrested by the authorities. In the final mission, Mike escapes from Liberty City on the plane of the drug dealer Cisco to Colombia.
‹
›
Home
View web version