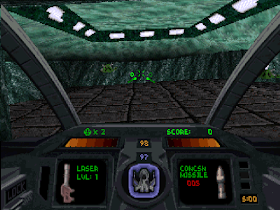 Genre: Action
Perspective: 1st-person
Gameplay: Shooter
Vehicular: Flight / Aviation
Setting: Sci-Fi / Futuristic
Published by: Interplay Productions
Developed by: Parallax Software Corp.
Released: 1997
Platform: PlayStation (PSX, PS1)
The plot is the same as in the first part. You are a pilot of a spacecraft, who has been given the task of destroying rebellious robot children. Your goal at each level is to disable their control center. To perform these tasks, you will have to use all the capabilities of navigation equipment.
But the main question is: "What's new?" Answer. 30 new balanced levels, filled with explosions and dizzying flights, 30 new final bosses, more nimble, quick and dangerous than in the previous version. However, you should not worry, in Descent II there are 13 new powerful types of weapons, with proper use of which you will feel very confident.
In this game, your goal is hidden deep and far, in the labyrinth of underground mines. You at every step awash treacherous failures and traps. Evil guards try to stop your progress.
You also play the role of a mercenary mercenary, to whom PTMC Corporation pays money for ordering your mining operations in the Solar System. It is necessary to get rid of underground robots, which the aliens turned into dangerous and aggressive enemies, infecting them with a special computer virus. After completing the mission, you will return to the starting point near the boundaries of the solar system to receive reward and well deserved rest. But then it turns out that you were slightly deceived, and you have to perform another simple exploration task. Arriving at the place of the assignment, you understand that it is impossible to name it "uncomplicated" ...
The action of the game is observed from the first person. You need to go through unharmed through 30 levels in the dark of underground tunnels, battling with enemy robots. You must gradually gain the ability to maneuver and fight in a 3D environment, having six degrees of freedom.
At each stage, you need to solve a specific problem - for example, disable the reactor and quickly flush away until everything around has blown into the air. The ways of solving problems are different. The first levels are fairly simple and understandable, and there are no serious threats to your life here. But at subsequent levels you will need considerable skill to avoid meeting the most dangerous of robot enemies, excellent cross-country ability - to explore dark dungeons, as well as the ability to do two things simultaneously - to fight and solve puzzles. By the end of the task, the stress reaches its apogee, because the geometry of the mines becomes puzzling in itself.
There is no common way to achieve the next goals here. Usually one and the same point can come in different ways. The artificial brain, which controls robots, perfectly uses a 3D environment: robots shoot at you from behind and immediately hide behind a corner or into any depression, so you do not even understand who fired; they can also suddenly jump out onto you out of total darkness. Game animation is reconciled from the point of view of the laws of physics: robots, in which a heavy charge has fallen, very naturally recoil; understandable and predictable impact of explosions; Force fields produce energy acting in random directions.
In principle, the game Descent II - for one player; However, with the help of a connecting cable, two can play it - in Anarchy modes (anarchy, rather, a duel), CoOp (cooperation) or RoboAnarchy (anarchy among robots). In the first case, one player must destroy the other as often as possible; in the second they, naturally, unite their efforts. In the third case, there is a competition to destroy robots.
The creators of Descent II took into account the flaws that existed in the first version of the game, made it a lot of new, made it much more intelligent and at the same time live. At your disposal - a lot of interesting weapons, ranging from super-lasers to the "shell-earthquake." Traveling through the mines, you continually come across various means of transportation - Guide Bot, Bandit, PIG (security bots), ITD (Underground Tactical Robot), and others. In some cases, they can but do not forget that they (with the possible exception of a reliable Bot-conductor) can be infected and therefore deadly ...