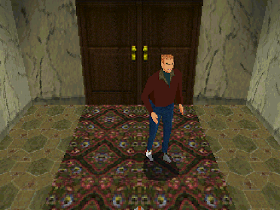 Genre: Adventure
Perspective: 1st-person, 3rd-person, Top-down
Gameplay: Puzzle elements, Survival Horror
Narrative: Horror
Published by: Matsushita Electric Industrial Co.
Developed by: Riverhill Soft Inc.
Released: 1994
Platform: 3DO Interactive Multiplayer
The story of the game tells about a mysterious archaeologist - Doctor Hauser. In the 1950s, he became world famous thanks to a series of sensational discoveries. But then Hauser disappeared without a trace, and for many years no one heard anything about him. What happened to him? Where is he now? Maybe he died? Or is he just tired of work, fame and ubiquitous journalists - and has gone somewhere far away, where no one will bother him?
We play the role of a 28-year-old reporter named Adams Adler. A few years ago, he communicated with Hauser and interviewed him. But after Hauser disappeared, our hero began to torment his curiosity - and he decided to find out the fate of the missing archaeologist. Soon Adams gets an interesting tip: it turns out that Dr. Hauser secretly moved to a country house on the beach and leads a secluded lifestyle.
Without thinking twice, Adams sets off to check this information and meet with the scientist. But after approaching the Hauser mansion, our reporter finds with surprise that the house looks abandoned, and the front door is not locked. As a result, Adams decides to go into the mansion - and this decision becomes the most terrible mistake in his life. As it turns out, the house is lashed with deadly traps! Can we escape from the eerie mansion and unravel the secret of Dr. Hauser?
The concept of the game is much like Alone in the Dark. We wander around the mansion, look for keys and other useful objects, solve whimsical puzzles, and also read various diaries and notes. But if in AitD the surrounding world was only a static 2D picture - then in Doctor Hauzer everything is done in full 3D.
We must admit that the graphic design here looks very cool for its time. And the main character even has facial animation - in some scenes we can see how his face changes. The game takes full advantage of the technical power of Panasonic 3DO. But that 3DO could draw such an innovative graphics, developers had to significantly lower the frame rate. It's difficult to determine the frame rate by eye - but I think that the game gives out only about 5-6 frames per second. At first it looks rather strange and unusual, but after a few minutes of the game you get used to it and stop paying attention to the low frame rate.
Thanks for the transition to 3D, we can now control the camera by switching between several available review modes. The first mode is fixed camera angles, as in Silent Hill and Dino Crisis. The second mode is a first-person view, like Echo Night. And the third mode is a top view.
Each regime has its pros and cons. The fixed camera creates a feeling of "cinematic". But if you want to carefully examine the room in search of hidden objects or traps - then you will be more suitable mode from the first person. A jump over the abyss is more convenient with a view from above. Thus, the 3Dity and the free chamber help to make the process of studying the mansion more realistic and interesting.
Another important difference between Doctor Hauzer and Alone in the Dark is the absence of fights with monsters. The main character can not fight, and no monsters are here. Instead, our main "enemy" is the mansion itself and its deadly traps. There are various secret mechanisms hidden everywhere that can work at any moment. One thoughtless action - and we can instantly fall into the abyss, poison with poisonous gas, please under the giant cobblestone, get an arrow in the forehead or completely lose the head, hitting a huge ax.
This is where the importance of a free camera in the game process manifests itself: in order to successfully solve puzzles and avoid traps, we must carefully examine the environment. But at the same time, it is difficult to determine in advance where the danger comes from - and this makes the game more tense, forcing us to constantly be on our guard.
Also, an important role in creating an atmosphere is played by sound design. Music in Doctor Hauzer is difficult to describe in words - it's a bit bizarre and surreal, but at the same time gloomy-mysterious. The music here reminds me of a cross between the soundtracks from Resident Evil 1 and the Rule of Rose.
The Doctor Hauzer perfectly passed the feeling of being in a mysterious mansion - and this is a very important advantage of the game. The mansion consists of two floors and has about 20 rooms. The interiors are well-designed - each room has a certain individuality. Everywhere there are some curious details (and to all the subjects of the interior our main character gives comments). You can pore over the old paintings on the walls, and you can look out the window - and listen to how the wolves howl in the distance and the owls hoot. And of course in every room there are different caches and traps. In general, wandering around the mansion and unraveling its secrets is quite interesting.
The main disadvantage of the game is a very short duration. Even if you play leisurely and carefully examine each room - then the complete passage will take only about 2 hours. But for the sake of justice, it should be noted that such a meager duration was quite normal for the horror games of that time. For example, D no Shokutaku, Clock Tower and Mansion of Hidden Souls pass even faster.

Doctor Hauzer was much ahead of its time, becoming the first completely 3D horror. But the merits of the game are not limited to only innovative graphics. Doctor Hauzer also boasts an exciting process of researching an abandoned mansion, an original idea with traps, an interesting history and a dark atmosphere. In addition, the game had a great influence on the development of the horror genre, becoming a role model for later Japanese horror films.

A - all actions: find, take, use
C - running (a little faster than just walking)
L - change the viewing method. Switches three modes: 1) from the third person, from the side, 2) from the first person - what is before the eyes (as in the "DOOM"), 3) the top view
R is the mode of rotation. While R is pressed, you
You can turn your head without changing the position of the body
PAUSE - pauses the game and calls up the "inventory" menu. The menu is made in Japanese. The ↑ and ↓ buttons scroll through items in Inventory, ← and → allow you to view the text description of the selected item, and A to use the selected item.

From the very beginning of the game, you have a book that allows you to save and restore the game.
Wait 5 seconds for SHANDALIER to go down. You leave from the first room. In the second room inside the grandfather clock there is a key that you need. to go through. When you take it, there will be a strange animation. Open with a white key the door opposite.
Enter the second door, take out the flowers from the first vase and put them in the second. Take the white key off the bed.
Go to the next room through the picture with a flower. Take from the table near the door a green book, and from the dressing table - a red key. From the third wardrobe take the card and leave the room through the door.
Run through the entire corridor and press A on the red car. Exit through the door, running along the old floor.
Use the red keys to open the double doors near the grandfather clock. Push the table to the opposite wall - the switch will work, and the doors will open on the reverse side.
Pull the Cubboard down and exit through the door. Quickly run down the aisle and enter from the entrance.
To go to the second kitchen, enter the door directly in front of you. Take the orange key from the third Cubboard, and the knife from the third Cubboard on the other wall. Take a can of gasoline from the floor near the red table and exit.
Enter the door to go to the first kitchen. Push the table across the room to the squares of the fourth Cubboard, then go through the hole. Take the ax from the cubboard in front of the door and exit.
Go back down the corridor to the next door on the opposite side, and, using the orange key, go into the dining room. Take away from a huge table candles, take a log from the fireplace - they can punch holes. Jump over all the holes and exit the room.
Enter the door above the exit door (stairs). Three huge spikes will grow from under the floor to block you.
Enter the door on the left and make your way to the bottom of the bookshelves. From the first shelf take the lighter, and from the bottom shelf of the next cabinet "CROW BAR". Go to the first bookcase, take the gun from the first shelf. Entering the opposite cupboard, you will go down the stairs.
Take the red book from the fifth shelf and the red book from the first shelf opposite (in the middle). From the table near the fan take the red book. Take a fan from the wall, and from the table - paper. Exit through the first bookcase on the other side of the first red book. Now go up the stairs.
With the help of "CROWBAR", release the upper left corner, use candles and a lighter. Go down the corridor and open the door. From the first shelf, take the green book, stand near the bed and, looking at the green light, use the gun. Go back to the door behind the thorns.
After setting the cursor on the corpse lying on the ground, click on A and take the red key, which you will open the next door. Beware of big scissors. Open the brown box, take the wooden key and go out.
With the help of a wooden key, you will enter the next room. Look at the picture on the wall and click on A to turn on the switch. Go through (do not run!) Into the hole in the floor from the side of the picture.
Opening the door, take the orange key and the green book from the table from the bottom shelf of the second cabinet. Now go out, go through the opposite hole and open the door with an orange key.
Near the picture, open the first Cubboard. Return to the dark room with the clock and hit the orange hook with an ax. Open the picture on the wall and take the picture from the Cubboard. Open the second door behind the picture and take away the dynamite. Exit, go towards the fireplace and double-click on A. You are now going down. Open the door to the right, take the white key and go out. Enter the other door and shatter the far wall in front of you with dynamite, using cigarettes. Come out, do not hesitate! Again enter the same place, jump into the trolley and press A.
‹
›
Home
View web version