Kingdom: the Far Reaches (3DO) 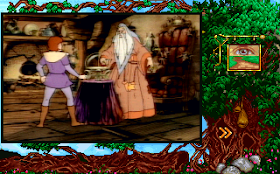 Genre: Adventure
Art: Full Motion Video (FMV)
Gameplay: Puzzle elements
Published by: Interplay Productions
Developed by: Interplay Productions, Inc., Virtual Image Productions
Released: 1995
Platform: 3DO Interactive Multiplayer
Despite the fact that I played this game on 3DO, it also appeared in due time on other platforms. The first version of the game was published on arcade machines back in 1984, then 10 years later, in 1994 it was released for "Philips CD-i", and a year later, in 1995, the game visited 3DO and personal computers. Reissue of the game on CD-carrier was due to the fact that with the advent of 3DO (and on the PC at the same time), the era of "interactive entertainment" began. CD-ROM firmly entered the lives of not only music lovers around the world, but also gamers. He opened the developers new spaces for imagination and opportunities. It was during this period (1994-1997) that the game industry created the largest number of games with live actors and animation inserts. Then the dream of millions - "interactive films" came true, let's call them so. Many thought that there is nothing better than "watching a film" and influencing the events in it, affecting the characters and the plot, thereby being a direct participant in the events. To decide the destinies of kingdoms and entire worlds.
On the very same 3DO console almost in all games you can watch "game rollers" with live actors, in addition to the games I mentioned above, you can note such "revolutionary interactive projects" as: "Supreme Warrior", "Night Trap", "Snowjob", " games-shooting galleries from ALG "and many others. Of course, the multipliers could not pass such a "revolution" side. From 1994 to 1997. it turned out not a few "interactive cartoons." On 3DO, this is the game series "Space Ace" and "Dragon's Lair", as well as "Brain Dead 13". A distinctive feature of these games was that you needed skill and good reaction, as well as remembering all places and locations, and ways of passing them (in most cases it was reduced to recording the order of button presses in certain locations on sheets of paper). Since it was not possible to pass such games from the first time. But there were other projects, for example "Strahl", where, in addition to the reaction, very "movable" fingers were required - for so fast to knock on one button, in order to avoid a trap or perform an action in the game for a short period of time, I could not find nowhere else.
"Kingdom: the Far Reaches", stood out against the background of these games. Not only that in the game there are almost no places where you need to hammer quickly on the buttons (and if there is a time allotted for making a decision, then at the bottom of the screen there are always provided items to solve this situation, although it must be said that not all items are useful, apparently it such a "joke" from the developers, in order to diversify your adventure), so even in the game there was a story and a tour of the whole kingdom, and not just for a single lock. Also in the game, the story line intrigued - in the game there was a string that guaranteed us fascinating journeys and unforgettable adventures. Well, of course, the work of artists deserves separate words - in front of us there is a beautiful cartoon with traced characters and backgrounds (I especially like how the Kingdom - Weigard - Weigard is drawn, where we begin our journey, and in particular such locations as: Glendoe, the Haunted Waterfalls and Eldridge Forest). Well, what beautiful music will accompany you during the game - it's just not describe in words!

In Daelon, take the release spell. Go to the bare rocks, and then - along the left path. Get the crystal of Kaldar. In Delon, take the epiphany spell, and in the Treefolk Forest take the wooden staff of the elf. Cast a spell of insight to see the dance of fairies, and give them a staff. In a crystal palace guarded by a tiger, use the crystal of Caldara. In the palace take a black rod.
On the swamp, apply the spell of insight and follow the pointer to Illes.
Go to the shimmering oasis, and from there - and the temple of Cindra. Then go to the west coast and work with a black rod for diabolical fish. From the eastern shore, go to the black tower.
With the help of the crystal Caldara, you can cope with the magic of the Plague Magician. Enter the main door and take a bloody sword.
Go to the alley of the silver kings, and from there - to the Drakesblood palace, and in the throne room kill the master with a bloody sword.

Walkthrough through three areas. Move the cursor over the picture with the eye and look at the map. If your hero is in the forest or near Glendø, then now you are in the Wiegard area. If Latan wanders in the south. in the desert, he is in the Neck. If you are in the east, near the black tower or in the palace of the Drakesblad, then your area is called Iscar.

In the center of Glendoe, listen to two women. While on the outskirts of Glendö you did not heal the blind (the curse of insight), do not go to the Guildhall: the waterfall will still not be available to you. If you can get to the waterfall in the right way, then restore all life.
If you approach the waterfall from the side of the Skylar temple, you will gain power over the tides that will allow you to get to the sea pavilion.
Do not wander in the areas "Lower Pools", "Moors", "Bogs on the Moors".
Do not go to the crystal palace without the crystal of Caldara (from the rocks): it will be needed to defeat the tiger. In the Palace, use the seal from onyx (from the dune people's dock - Dunespeople) to go into the room with the black Wand. Take the rod.
A woman in the woods and a Nordon hunter (Nordon the Huntsman) at the crossroads say business.
Smoky monsters on the bare rocks smash cold fire. To read the ancient letters on the stone.
apply an understanding spell. The road straight ahead leads back to the suburb of Glando, and the path to the left - to the crystal of Caldara.
In the swamps use the spell of insight to gain access to the desert and to Ilya. Do not go to Il-die before that. Choose a cold fire (see above).
Dalon will give you, when the time comes, spells for seeing, releasing, understanding and traveling.

In the temple of Cindra do not go without a black rod. The door to the left leads to Torlock, which can be kicked out with a black rod. After that, behind the central temple door you can get a mascot of Scepter.
In the desert you can not stay long. Without an enlightenment spell, you will not see a path. When you come to the oasis, show the women a skeleton talisman, and they will give you a charming rainbow. But do not take the rainbow by force. Do not touch the water of the shimmering oasis.
Dune people also want to see the talisman. While you do not have it, use an understanding spell, and they will lead you to an onyx seal.
In the lost mines you will meet Maluki - a bad adviser and healer.
The bridge supervisor (on the hills) requires silver wheat - a harvest of silver kings.
Having received power over the tides, go to the sea pavilion to get the gold cup. Return to the Drakesblad Palace for the silver wheat. If you do not have a charming rainbow, be careful with the devil fish; will help a black rod. If necessary. Quickly move around and use the clock room in the Drakesblad Palace. Returning the gold cup to Skilar, you will get a hunting horn.
If the thieves steal your hero's bag, remember this place, then come back here, and go to the dune people.
If sand monsters appear, use the release spell sooner. When you encounter the magic of the plague, use the crystal again.

At the entrance to the black tower the Crystal of Caldara is useful. At the end of the path, the crystal and hunting horn will help you cope with the lizard people (Lizard). To go to the left door, use the horn. After passing, immediately cast an understanding spell to get Iscar's runes (Iscar). The main door leads to a sword of blood, necessary for the collection of silver wheat and in a battle with Drakesblad.
In the labyrinth, using the enchanting rainbow, you will find "Orb Mobus", which will allow you to get coins in the valley of silver kings. And the coins help pass to the tombs.
In the palace of the Drakesblad from the room with the harp there are several exits. The steps lead up to the princess, the door in the corner into the room with the clock, and the door with the crown to the banquet hall. The room with the clock allows you to teleport to the east coast (on the right) or to the mansion of Dalon (on the left).
The princess will give good advice. The middle door in her chambers allows you to enter the room with tapestries. Act on the tapestries of Orb'om - and you can see the whole kingdom. If the bag is stolen from you, the door on the left will return you to the wizard's chamber. There, when sorcerers sleep, pull the rope.
From the banquet hall, the door with the crown leads to the throne room. To get out of the throne room, or bribe Drakesblad with coins (he will let you in to the burials), or kill the Drakesblad if you have a bloody sword and Iskar runes.
‹
›
Home
View web version