Who Shot Johnny Rock? (3DO) 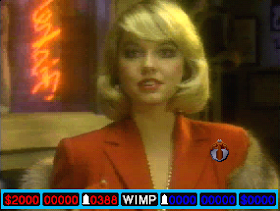 Genre: Action
Perspective: 1st-person
Art: Full Motion Video (FMV), Video backdrop
Gameplay: Arcade, Shooter
Published by: American Laser Games
Developed by: American Laser Games
Released: 1994
Platforms: 3DO Interactive Multiplayer, DOS
The game takes us to Chicago, in the 1930s. We play the role of a detective who was hired to solve the crime: who killed the singer named Johnny Rock. Then there was his future bride, Red. In general, it is necessary to ask residents, find criminals, the customer and so on. And also to protect yourself from death - so many of your haters were found right away.
At you by the way the limited quantity of cartridges so it will be necessary then to buy. And every time you die, money will be taken away. The game is below average, because the quality of the video is mediocre, often you do not see the opponent running out to you, and if you shoot accurately, then why do you miss.
Who Shot Johnny Rock came out on the Arcade machine, PC, DOS, Sega CD, Philips CD-i, 3DO, PlayStation 2, Xbox.
‹
›
Home
View web version