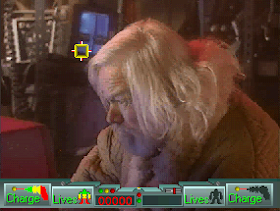 Genre: Action
Perspective: 1st-person
Art: Full Motion Video (FMV), Video backdrop
Gameplay: Arcade, Shooter
Setting: Sci-Fi / Futuristic
Published by: American Laser Games
Developed by: American Laser Games
Released: 1994
Platforms: 3DO Interactive Multiplayer, DOS
Space Pirates is another game made in the genre of interactive video for the game console Panasonic 3DO. For some reason those years believed that future video games are just for games of this genre. This time we will have to go into outer space and meet with the space pirates, who took control of the spacecraft. The game takes place in 3030. We take on the role of "Star Ranger", he receives a distress signal (SOS) for Ursula Skye from the commander of the star ship Colonial Star One. The ship was captured by a team of pirates called the Black Brigade. Under the guidance of the captain of Captain Tallinn. The entire crew and passengers of the ship are in great danger, you are going to help them.
The main task in the game is the destruction of all enemies and, as a result, their leader, as well as the destruction of their ship "Black Dragon" (Black Dragon). The ultimate goal is to use the Star-Splitter Cannon weapon, but first you will need to find three crystals scattered in different places.
As in all games from American Laser Games, except for "Who Shot Johnny Rock?" The name of the character is not mentioned. To teach us and criticize the game will be the same character that we can meet in Mad Dog McCree and in Mad Dog II: The Lost Gold.

Each time, pirates attack you in a new way. The tasks facing you are also changing.
On board the Black Dragon shoot at the flying ball (for each you can get 25 points).
At the entrance to the main premises of the ship, it only makes sense to shoot if the enemy points a weapon at you.
In the third compartment, do not rush to shoot: it's a hostage. Killing him, you lose one life. Death for death, as they say. The same in the hall: do not shoot immediately, or you will kill the hostage. The waiting time in the game can be great, so that you even have time to do shugaring at home, but this expectation, it's somehow fascinating!
Tied to the cross, the girl explains to you by what fire to shoot. Sometimes she speaks - on blue, sometimes - on yellow. A little later this color will be shown to you in full screen.
In the cabin of the ship do not waste on Captain Talon cartridges: he is invulnerable.
When the hostage, next to which the associated commander is located, turns the wheel, a symbol appears on this wheel at the level of his chest. On what symbol you need to shoot, you showed before (on the card). It is necessary to shoot only this symbol.
On board the ship the colonists will show you the sequence in which the crystals should be connected.
On the mission of the upper left corner, shoot the girl in the hand, the man in the mouth. Collect points by shooting glasses.
On the mission of the lower left corner, shoot the skulls.
On the mission of the upper right corner, you will be recommended to shoot before the lightning strikes. Each time, get inside the ring. Shoot the staffs.
On the mission of the lower right corner, choose not exactly what Polina offers, but the exact opposite. Collecting glasses, shoot the ball. Now we need to light the crystals in the same order as you were given before.
Further, when the ships of pirates swim before you, three points on the sides of the screen form an invisible triangle, and the ship can be blown up only when it appears inside this triangle. When the Talon appears, shoot not at him (uselessly) but into his weapon. Destroy the pistol in the left hand, then in the right, the cannon on the right shoulder, the cannon to your left on the pedestal.
‹
›
Home
View web version