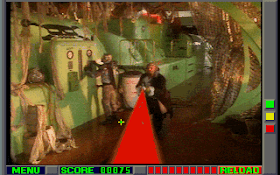 Genre: Action
Perspective: 1st-person
Art: Full Motion Video (FMV), Video backdrop
Gameplay: Arcade, Shooter
Setting: Sci-fi / futuristic
Published by: American Laser Games
Developed by: American Laser Games
Released: 1994
Platforms: DOS, 3DO Interactive Multiplayer
The distant future ... I'm afraid to tell lies, but it seems like the 3030th year. Duck here, 3030th year. In a fashion classic, with a touch of decor elements every 80th years of the twentieth century, of blessed memory. Well, you know, all sorts of these trinkets, hair style a la "explosion at the Pasta Factory," the boys are gay, white roses and a lot of nice that we are already happy to have forgotten. Well, in the 3030th, all this is true, but still relevant, far away, even non-computer, video or audio, but a real bloody piracy and right on a cosmic scale, with all their star ships, the universal treasures and even a one-eyed captain of the galactic - type of unprecedented cruelty and colorful appearance. 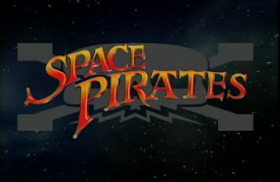 Space Pirates - another game from American Laser Games and another interactive shooting gallery. This is when you show some unpretentious movie screen where people poking their guns all the time, and you can only that these people shoot before they get their guns will have time at least once palnut. In this case, if you're shooting time before they are, then you do not work, and if after that will not work all the more, and even life will be taken away and will have to start from the beginning if you do not play, at least from the beginning of the episode.
Episodes of these few. They differ as a rule sets, there is still with them the story develops. As far as I recall, the Space Pirates had to collect such colorful crystals to palnut of powerful cannons on the pirate ship, and then if you're lucky, and then nail the most important pirate, that is the very master that I mentioned at the beginning, such as the way is enduring and plus a very densely armed.
The interface modes and practically also the same as in The Last Bounty Hunter, and, accordingly, can also play together. The only difference is perhaps in a more interactive. That is, if The Last Bounty Hunter, the whole game is practically a movie, the Space Pirates already have some of the same habits in the adventure. Such as a simple puzzle or there completely computer scene (at the time volley on the pirate ship). It only makes the game more interesting, albeit slightly, and then did such a kind of weird among the future can not be compared with westerns, though not the best quality.
In any case, if we talk about the genre as a whole, the Space Pirates is quite worthy of its representative. I still remember this game for 3DO (that is, it was not only on the PC), and here and so, somehow now speak negatively about her not want to. Yes, one can see now that the people at the time were infected digitized video and stuffed this video anywhere and in large quantities. And if you think about it, and that after all the money went to the very large sum of it all. And now look, what about the games on these few people remember and no nostalgia, none of that, thank God, no.
‹
›
Home
View web version