The Last Bounty Hunter 3DO 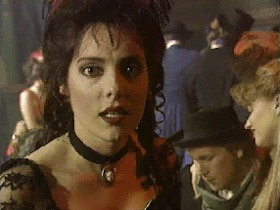 Genre: Action
Perspective: 1st-person
Art: Full Motion Video (FMV), Video backdrop
Gameplay: Arcade, Rail Shooter
Setting: Western
Published by: American Laser Games
Developed by: American Laser Games
Released: 1995
Platforms: 3DO Interactive Multiplayer, DOS
Last Bounty Hunter - the third shooter in the western style from ALG. As before, lonely, and from this very fair bounty hunter administer justice and help maintain order in the vastness of the American prairies. At the very beginning of the game, he helps the US Army in confronting a small group of bandits. After the successful massacre, General Clinton Briggs instructs us to find out whether the four most notorious scoundrels of the surrounding territories are alive or dead. It's Handsome Harry, Dirty Dan, El Loko and Cactus Kid. The methods of struggle are extremely unpretentious: bandits must either be killed or arrested. From the clarity of the operation depends on the amount of cash reward, which eventually translates into prize money. Like any bounty hunter, the main character skillfully handles his six-shot revolver, and sometimes with a rifle.
The game will have to quickly decide whether to squeeze the trigger or not, because not always before us pops up a scoundrel with a barrel at the ready, often the sight is aimed at quite peaceful residents. The gameplay in general is the same as Mad Dog McCree II. This time, money was added to the game - for killing scoundrels (and getting on bonus items), the piggy bank is replenished with ringing dollars. Passage of the game became even more nonlinear. For example, depending on whether you succeeded in saving some civilians or not, in the future you can meet really brutal children who do not have a chance to survive. An interesting innovation awaits at the end of each stage. If you knock out an expensive item from the hands of a thug, he immediately surrenders. The question is - why these torments, because you can just shoot him? And it's about money - only half of the reward will be paid for the dead. And the bandits can later escape - what a pleasure to catch him again and get another bag of cash!

A - fire;
hold B - to accelerate the movement of the cursor twice;
hold C to accelerate cursor movements
four times; X - call the main menu.