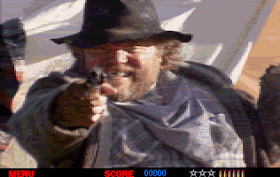 Genre: Action
Perspective: 1st-person
Art: Full Motion Video (FMV), Video backdrop
Gameplay: Arcade, Rail shooter
Setting: Western
Published by: American Laser Games
Developed by: American Laser Games
Released: 1995
Platforms: DOS, 3DO Interactive Multiplayer
Originally the game was released in 1994 as an arcade game in which the files were on laserdisc. Later, the game was ported to DOS, 3DO, CD-I, DVD, Wii, PlayStation Network. In 2000, the rights of the game were purchased by Digital Leisure. They brought the game back out for Wii in 2002. 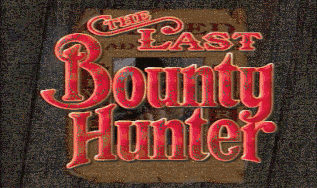 The movie scenes were shot at the Old Tucson Studios in Tucson, Arizona. It is one of the last games before the company went bankrupt.

The player controls a bounty hunter who goes from village to village to look for outlaws that plague the region. These outlaws belonging to a particular gang, each with their own gang leader.
The game consists of four large levels with several sublevels. The sublevels, the player will battle with the gang members. At the end of each major level the player confronts a gang leader. There are four levels, including four gang leaders: Handsome Harry, Nasty Dan, El Loco and The Cactus Kid.
The player can turn his enemies in two ways: injure or kill. This choice determines the final scenes in which the arrested criminals are brought to justice.

In the original arcade game, the player uses a light gun. At subsequent ports of the game, depending on the system, use the computer or an additional light gun.
The player gets a cash prize for each outlaw he struck. When he has started the game just over a revolver. With the money he can buy a shotgun. Finally, it can be used, there is another type of revolver bullets containing more than the first. Further bonus points can be earned by hitting all sorts of skulls, lanterns, wooden wheels.
The player has to start the game three lives. He loses a life when he is hit by a ball or when he kills an innocent civilian.
When the player alive extradite an outlaw, he gets more money. However, some outlaws escape from prison and return later in the game again.
‹
›
Home
View web version