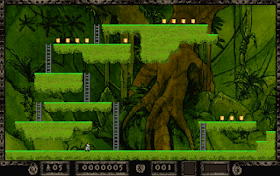 Genre: Action, Puzzle, Compilation
Perspective: Side view
Visual: Fixed / Flip-screen
Gameplay: Platform
Interface: Direct Control
Published by: Natsume
Developed by: Presage Software
Released: 1998
Platforms: PlayStation (PSX, PS1), DOS / Windows 3.1, SEGA Master System, Nintendo (NES)
Not many people realize that the game Lode Runner was released for the PSX. Or rather, it's even two games in one: Lode Runner: The Legend Returns and Lode Runner Extra.
Game Lode Runner: The Legend Returns is a continuation of the classic version of the game Lode Runner.
The plot tells us about two characters (depending on the chosen game mode), Jake Peril and Wes Reckless. Jake and Wes explore unknown dungeons in search of treasure. But they are not alone in these gloomy dungeons, everywhere they will be pursued by mad monks.
Gameplay is similar to the classic version, you also need to collect different treasures in levels, while avoiding a collision with the enemy. In addition to digging pits, enemies can be stopped in other ways, for example, by bombs, a special net, knocking stones on them and much, much more. Also on some levels, in addition to treasure, you will have to solve various riddles and collect keys to leave the level. In both games there is a mode of two players. In this mode, two players are simultaneously present in the same location.
The game Lode Runner - The Legend Returns consists of 150 locations, divided into 10 worlds: Jungle, Fungus Delvings, Ancient World, the Crystal Hoard, Ice World, Relict world, lava world, phosphoric world, dark world, and Meltdown Metropolis (industrial world). One of the features of the world of the Shadowlands will be night, only from the player will go a little glow, like a glow in the second level of the game Earthworm Jim 2. In the mode for two players, we expect 30 locations.
The game is an excellent representative of the genre of trap-em-up or, more simply, puzzle games.
The game has a powerful editor levels "Construction". In it you can build a level of any complexity, set the necessary parameters and even choose background music.
Good game, I recommend it to everyone. It's even more interesting to play it together.

If there is a situation in the game that there is a brick above the stairs and you can "burn" it - burn it, jump to the stairs and wait until the brick "overgrows". Now in this place the brick will only be drawn, but in fact it will not be.
If in the level there is a staircase next to the wall of bricks, then "burn" the upper one, and then (when it starts to "overgrow") "burn" the second, under it. In this case, the picture of the first brick will disappear, but the brick itself will be present.
If, during the game, you find yourself in a difficult situation, perform the level switching and start at the same level. So you will not lose your life.

Infinite Lives: Pause the game and press Select + Triangle.
Level Warp - During play hold L2 or R2 and press one of the following buttons to warp to a different level:
Back 15 Levels: X
Back One Level: Square
Forward 15 Levels: Triangle
Forward One Level: Circle
‹
›
Home
View web version