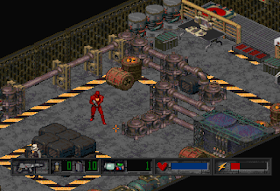 Genre: Action
Visual: Isometric
Gameplay: Shooter
Setting: Sci-Fi / Futuristic
Published by: ORIGIN Systems
Developed by: ORIGIN Systems
Released: 1996
Platforms: SEGA Saturn, PlayStation (PSX, PS1), DOS
The action takes place in the world of the dystopia of the XXII century, around a fighter of the elite unit nicknamed Silencer, which opposes the tyranny of the government under the leadership of the International Economic Consortium (IEC), and is adjacent to the rebel resistance.

The game is divided into missions, each of which occurs in separate locations and has its own tasks. The environment varies from factories and military bases to offices and space stations, filled with various enemies - soldiers, combat robots, as well as traps and puzzles. There are also non-aggressive characters - they can be killed without consequences, and their bodies can be searched to find loans that are subsequently spent on the purchase of new weapons.
All locations are equipped with a security alarm system, which can be activated by actions such as falling into the field of view of security cameras, shooting or the destruction of special closed doors. Activating the alarm leads to a fierce resistance to enemy forces, so the player is encouraged to avoid raising the alarm and disconnecting it as quickly as possible. In No Remorse, Silencer can not carry more than five weapons at a time.
The game presents an unprecedented, at that time, level of interactive environment. Most items on the level can be destroyed by the player's fire, some traps and security mechanisms can be used against enemy forces. The geography of the levels implies the use of tactical methods to inflict maximum damage with minimal loss of resources and ammunition. No Regret brought to the original game some useful moves, such as rolling forward and strafe in a squat. Weapons, ammunition, credits (money), first-aid kits and other equipment are scattered in levels, giving the player the opportunity to increase their arsenal.

In connection with the economic decline of the late XX century, the nations on the planet Earth began to self-organize into huge economic super-conglomerates. Subsequently, these continental organizations merged into the World Economic Consortium. IEC resorted to methods of tyranny, instead of dealing with the affairs of peace and prosperity. In reality, most civil rights were abolished, taxes rose above 90%, the army was mercilessly used against all who dared not submit to the IEC, the free press was also destroyed. Only the highest caste of the elites of the performers of the IEC had real strength and well-being. The consortium was ruled by President Gauthier and Chairman Nathaniel Dragan. MEK was opposed by an organization called "Resistance", led by a former colonel of the IEC, and now a general, Quentin Maxis. Resistance was a few small, poorly armed groups of socially disparate people: former soldiers of the IEC and workers who mingled with political dissidents and bandits.
In video intro, three infantrymen are shown returning with a mission they failed, during which they refused to open fire on civilians, accepted (possibly mistakenly) for the rebels. They are ambushed by the fighting robot IEC, and the two are killed. The remaining, unnamed captain (player character), destroys the robot grenade. Having weighed his chances, he decides to join Resistance, where, as a symbol of the military power of the IEC and political philosophy, he faces resentment, distrust and hatred. In the process of playing Silencer, resignedly accepting dangerous missions, often being limited in equipment, and constantly achieving success during their performance, gradually deserves respect from their colleagues.
As a result, Silencer discloses the Consortium's plans for the Vigilance Platform, which is capable of attacking any point of the Earth from outer space. This means that every city in which Resistance fighters are located can simply be destroyed at the request of the IEC. All such facilities are under the threat of orbital bombardment until they surrender. At the same time, the Resistance cell in which the player is located is split from the inside, and almost all NPCs are killed. Despite this, Silencer cleans the Vigilance Platform and destroys it. One of the traitors is also at the station, guarding the medical sector. He calls the player to a duel for the right to own the card access to the last location. While the Vigilance Platform detonates, with Silencer, Dragan communicates and promises to take revenge.

At the level pass code screen, type "L0SR". You will see an invalid code message. Start a new game or reload a saved game. While playing, press A + B + C to get full health and energy. Press X + Y + Z to get all weapons and reload the RP-22 or RP-32.