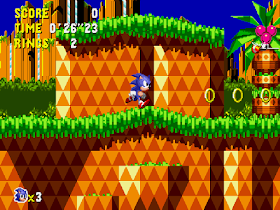 Genre: Action
Perspective: Side view
Visual: 2D scrolling
Art: Anime / Manga
Gameplay: Platform
Published by: SEGA of America
Developed by: SEGA of America
Released: 1993
Platforms: SEGA CD / Mega-CD, SEGA Game Gear, SEGA Genesis / Mega Drive, SEGA Master System
Sonic CD - the only game in the series about Sonic on Sega CD!
A kind of planet Little Planet appears once a year on Lake Never Lake and what is noteworthy is that there are amazing Time Stones stones with which you can control time. About this learned Doctor Robotnik, caught the planet and chained it with chains to the rock. Sonic needs to save the world (collect seven stones) from the misdeeds of the Eggman. However, he goes not alone, but with the girlfriend Amy Rose, who unfortunately is abducted soon by Metal Sonic. So your problem is more complicated.
The gameplay is similar to other games of the Sonic The Hedgehog series. We will also run through the levels, we will also kill monsters and robots. An interesting feature of the game is that the player can choose the variants of the stages - "present", "past", "good future" and "bad future" (you should touch the tablets with the English names of these words, while Sonic should maintain the maximum speed for a few seconds). they will be replaced visually, musically, and robot enemies will change.Also after the level, if you have collected more than 50 rings, a special level opens where you will destroy six plates of UFO to get the Stone.
The game was exclusive to the Sega CD for the time being, further ports went to: Windows, Xbox Live Arcade, PlayStation Network, iOS, Android, Windows Phone 7, and also in collections on GameCube, PlayStation 2.
‹
›
Home
View web version