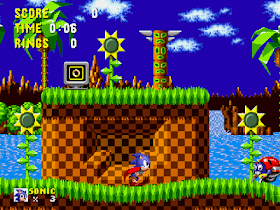 Genre: Action
Perspective: Side view
Visual: 2D scrolling
Gameplay: Platform
Art: Anime / Manga
Published by: SEGA of America
Developed by: Sonic Team
Released: 1991
Platforms: SEGA Genesis / Mega Drive, SEGA Game Gear, SEGA Master System, SEGA CD / Mega-CD
Dr. Ivo Robotnik, a mad scientist, kidnaps innocent animals, turning them into vicious robots! Only one guy is able to stop a series of kidnappings, initiated by a mad professor. This is Sonic, the coolest hedgehog in the universe, eclipsed by its popularity, even "Hedgehog in the fog." He has a radical "sharp" hairstyle and special sneakers, which allow him to run at supersonic speeds. We need to help Sonic fight the hordes of metal maniacs, and he's also eager to try out his special rotating attack Super Sonic.Sonic is a swift response to the Mario Brothers, and the games with his participation are first of all speed, a sea of ​​drive and pleasure. Yes, Sonic the Hedgehog is undoubtedly revolutionary, it's a pleasure to play. The game has bright graphics, great music and lightning-fast gameplay. Even by today's standards, it does not lose its attractiveness. No wonder that since 1991, Sonic is the official mascot of Sega, succeeding Alex Kidd. Already there is no Sega Saturn and Dreamcast, Sega has not released the console for a long time, but Sonic is still popular and appears regularly in new games. The game has 7 huge levels: Green Hill, Marble, Spring Yard, Labyrinth, Star Light, Scrap Brain and Final Zone. The first 6 zones are divided into 3 acts. At the end of each waiting for Robotnik with another devil's machine of his own production.
Level Select:
At the title screen, press Up, Down, Left, Right. You should hear a noise like a ring being collected. Then, hold A and press Start for a level select!
‹
›
Home
View web version