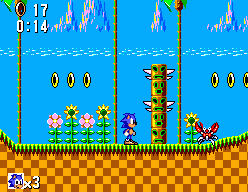 Genre: Action
Perspective: Side view
Visual: 2D scrolling
Gameplay: Platform
Art: Anime / Manga
Published by: SEGA of America
Developed by: Ancient Co.
Released: 1991
Platforms: SEGA Master System, SEGA Game Gear, SEGA Genesis / Mega Drive, SEGA CD / Mega-CD
An unparalleled series of games with Sonic! Speed game! A blue hedgehog should save poor animals from the hands of the evil doctor Robotnik. One of the best games on the Master System! I recommend.
Limitations of Sega's eight cues compared with the 16-bit Genesis / Mega Drive made themselves felt. The speed in the game is lower, there are no loops. In each zone, the Chaos Emerald is hidden in one of the first two acts, and not at special levels, like the SEGA Genesis / Mega Drive.
Sonic the Hedgehog - the last game released in the US for the Master System. The main sales of the first Sonic fell to South America. In this version, the levels are slightly changed and the gameplay is simplified.
8-bit versions of Sonic the Hedgehog 2 appeared before the 16-bit, so it was in them debuted Miles "Tails" Prower.
‹
›
Home
View web version