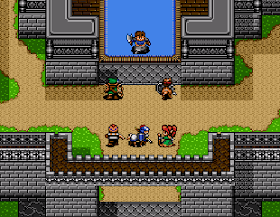 Genre: Compilation, Role-Playing (RPG), Strategy / Tactics
Perspective: Top-down
Pacing: Turn-based
Setting: Fantasy
Published by: SEGA of America
Developed by: Sonic Co.
Released: 1995
Platforms: SEGA CD / Mega-CD, SEGA Game Gear (Gaiden), SEGA Game Gear (The Sword of Hajya), SEGA Genesis / Mega Drive
One of the best games on the Sega CD. Shining Force CD is a compilation of two games with Sega Game Gear (Shining Force Gaiden and Shining Force II: The Sword of Hajya), as well as a pair of own exclusive for Sega CD scenarios.
The plot of the first part develops during, roughly between the first and second parts of the Shining Force (20 years after the events in the first part) in the country of Cypress. The ambassador of this country poisoned princess Anri from the kingdom of Gardiana. A young man named Prince Nick, dared to help the princess (he must find the antidote and destroy the King of the country Cypress). Immediately the team is going to Shining Force (the children of the parents from the first game Shining Force).
The second part tells that after a long war between the kingdoms Cypress and Gardiana, both sides decided to make peace. The reason for this was a new threat from the evil empire of Iom. Prince of the Kingdom of Cypress Nick, in the fight with Iom lost his hand - it was turned into stone. And now he can not own the legendary Hajya sword. However, he hires people with whom he will together to destroy the empire of Iom.
In the third part, you again control Prince Nick. A few months have passed since the Iom Empire was defeated. Just about you are crowned as King of Cypress. However, during the ceremony, the evil witch kidnaps Queen Anri (the one that was rescued in the first part). Who else but Nick can save her again and prove that he is worthy to wear the crown of the King!
Well, the last part tells us about how Nick and his friends decided to visit the Cypress History Museum. Suddenly, the exhibits come to life. But the worst thing was that it was an exhibition of enemies defeated by Nick ...
The game is a strategic RPG with a typical Shining style: most of the time you spend on turn-based battles. Everyone to play!
Naturally, the Sega CD version boasts improved graphics (compared to Game Gear) and high-quality sound.
‹
›
Home
View web version