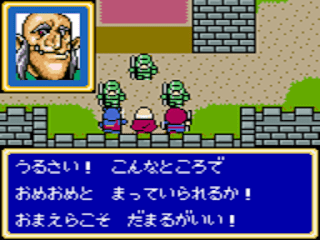 Genre: Role-Playing (RPG), Strategy / tactics
Perspective: Top-down
Pacing: Turn-based
Setting: Fantasy
Published by: SEGA Enterprises Ltd.
Developed by: Sonic Co.
Released: 1992
Platforms: SEGA Game Gear (GG), SEGA CD / Mega-CD
The first of three Game Gear games in the Shining Force series. The plot develops in a time, approximately between the first and second part of Shining Force (20 years after the events in the first part) and in the country of Cypress. The ambassador of this country kidnaps the princess Anri from the kingdom of Gardiana. You control a young man named Prince Nick, and you dared to help the princess. The Shining Force team gathers right there. That's it, I won't tell you further - you have to play!
The game is a strategic RPG with a typical Shining style: you spend most of your time in turn-based battles. But unlike other parts, you cannot visit cities here. Unfortunately, the game is in Japanese, but those who played in the first parts of the series shouldn't have any difficulties.
‹
›
Home
View web version