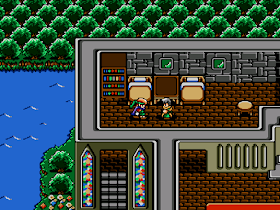 Genre: Role-Playing (RPG), Strategy / Tactics
Perspective: Top-down
Pacing: Turn-based
Setting: Fantasy
Published by: SEGA of America
Developed by: Climax Entertainment, Sonic Co.
Released: 1993
Platforms: SEGA Genesis / Mega Drive, SEGA CD / Mega-CD
One of the few representatives of the RPG genre on this console. This is a great tactical RPG. A huge number of characters, opponents, great music, a fabulous story and 30 long (and not so) battles await you in this game. You are the swordsman Max from the city of Guardian, the king sent you and your still small detachment to find out what the spies and the enemy town of Runefaust are looking for near the Ancient Gates. As it turns out, the cunning wizard Dark Sol wants to resurrect the evil that was sealed 1000 years ago by the Ancients - the Dark Dragon - the King of Darkness. He has many minions in the face of the devils, in the face of ordinary people who succumb to his charms and persuasions. Battles are tactical battles. On your side are several units of different classes: knights, warriors, sorcerers, healers, etc. Each of them has its own strengths and weaknesses. For example, warriors are strong, but slow, and mages are weak in defense, but fast and have the ability to conjure. Total game characters 30. Each class has its own types of weapons. After a successful attack, the unit gains experience, 100 experience points give the level, after receiving 10 levels of the hero can be transferred to the highest category: for example, the knight will become a paladin, and the magician will be a sorcerer, and they will have access to a new weapon that the lower class could not use. There is a great variety of enemies: here you are simple goblins, knights of the enemy state, the revived dead, as well as forgotten tools of the Ancients various robots and ancient laser cannons. You will not be bored, and the dramatic plot and excellent gameplay will make you go through this game again and again.

The Kingdom of GUARDIANA of the land of RUNE has long been a stronghold of peace and law, while guarding the gates of the ancient peoples THE GATE OF THE ANCIENT leading to uncharted worlds. In books from the royal library, which had been gathered for centuries, it was said about the long-standing grand battle between the forces of light and darkness. In one book, it was said that DARK DRAGON, who heads the forces of darkness, being defeated by the warriors of Light, promised to return in 1000 years.
A thousand years of peace and tranquility passed, and the kingdom of RUNEFAUST declared war on the other kingdoms of RUNE, to help DARK DRAGON'y return to this world again.
A small detachment of warriors, called SHINING FORCE (Shining Force), sets out on a dangerous journey to fight the dark forces of RUNEFAUST. and you head it.
The basis of the game is battles. You need to think a strategy a few steps forward. Does not make sense
describe each battle in detail, as each player chooses his strategy and tactics, acts on his own and depending on the composition of the team and the level of development of his fighters. Here are just a few recommendations.
During the battle forward, it is better to put the strongest fighters and shooters, and to leave healers and magicians in the rearguard. Each fighter should be with him herbs. Doctors - this is good, but mutual assistance in battle, too, does not hurt. You can treat yourself or your nearest neighbor with drugs. The main character must remain alive throughout the battle, otherwise you will lose half of your gold reserves, and you will have to start the battle from the beginning. Try to always keep the healer close to you. In a critical situation, it is better to use the magic of EGRESS or ANGEL WING - in this case, you will at least not lose your money. In the event of the death of other team members, the battle will continue without them.
Sometimes there are super-powerful attacks from both the one and the other. Also, fighters of both sides can sometimes defend themselves against attacks, but, unfortunately, for some reason this privilege is often used by the enemy. This does not apply to the action of magic, no one can stand against it. And double blows, and defense, and super-power attacks occur automatically, and you can not influence it. Between battles, you will visit several cities and villages, gathering useful information, talking to local residents, buying or finding various items that will help you on your journey, and will gradually find all the new fighters.

If you press buttons A or C, while in the city, images of several icons appear (use A or C):
1. Talk - you need to stand right in front of the character.
2. Items - this icon can be expanded:
use - use any item
drop - get rid of unnecessary item.
give - transfer any item from one character to another
3. Explore - used to open chests or explore any places.
4. Magic - this icon does not work outside the battle.
The following icons appear in stores when talking to a merchant:
buy - buy something (when you buy a weapon, do not forget to arm the fighters with it!);
sell - sell anything you have;
repair - fix any item that needs repair;
deals - Sometimes useful items can be sold.
In each city you can find a priest (Priest). After talking with the priest icons appear (used C):
save - save the game;
raise - restore the killed character;
promote - raise the level (L) of a character.
You need to score 10 levels, and your fighter can be transferred to a higher category. When translating, the character becomes weaker, but then he can use more powerful weapons and quickly improve his combat skills. It is not recommended to raise more than two or three fighters at a time, so as not to drastically weaken your team;
cure - if a character is poisoned, paralyzed, or damned, you can cure him.
In the headquarters in each city you can:
advice - get Nova's advice before every battle, which tactic is better to choose;
item - see what you have in stock;
status - view the status of each team member: level (LV), vitality (HP), magic (MP), attack, defense , agility, move;
join - replace one fighter with another. Since no more than 12 people can participate in a battle, you will have to choose the strongest and periodically replace this or that character.
Also at headquarters you can talk to each of the fighters, regardless of whether he fights or is currently “in reserve”, and find out what his fighting spirit is.
During a battle, you control your character with the arrows and buttons A or C. By pressing A or C, you can:
attack - attack the enemy;
item - use any object, give it to another fighter who is near you, re-equip or equip (equip) a fighter with your existing weapon, get drop of an unnecessary item;
stay - stay at the place where you brought your fighter;
magic - use magic (who has it);
If you press In at the time when the turn to move is given to your character, a white glowing square appears. Hovering it on your fighters or opponents and pressing A, you will see the full status of the character.
If you square the square on the free space and press A or C, the icons will appear:
Mar - battle map. You can see the location of your forces (green) and the forces of the enemy (red);
message - you can remove some of the information that appears after each battle;
speed - the speed of passing information on the screen;
quit- you can leave the battlefield at any time by answering “yes”, and the next time the game will start from this place.

The characteristics of the fighters given here are purely reference character. Each player is free to form a team at his discretion or depending on the circumstances (how well managed to develop a particular character).

(given in order of increasing power)

Some weapons, in addition to direct assignment, can be used (use) in combat as magic:
When using a weapon in this way, you need to constantly monitor its condition and repair it in stores in a timely manner if you do not want to lose a valuable item. When an item begins to break, after its critical use, a warning appears on the message screen. In this case, the remainder of the battle, use this item just as a weapon, and then do not forget to repair it. Part of the weapon is cursed, and if you equip your character with it, then in battle this curse may appear (the fighter loses some of his life energy or refuses to attack at all). But on the other hand, the force of a strike with such weapons increases significantly, so decide for yourself whether to use them or not. If you still arm them a fighter, then later, if you want to change weapons, the curse must be removed (cure) in the church. Cursed: Devil Lance and Demon Rod.

In stores you can buy: