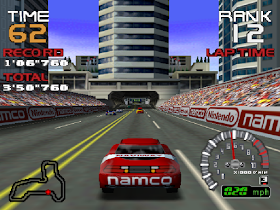 Genre: Racing / Driving
Perspective: 1st-person, Behind view
Gameplay: Arcade, Vehicle Simulator
Vehicular: Automobile, Street Racing
Published by: Nintendo of America Inc.
Developed by: Namco Limited, Nintendo Software Technology Corporation
Released: 2000
Platforms: Nintendo 64 (N64), PlayStation (PSX, PS1)
Ridge Racer - one of the iconic series on the series of consoles from Sony. But how did he find himself on the console from the big N64? Apparently, people from Namco just wanted to squeeze even more money out of the popular TV series. It turned out or not - you will find out below. So, consider the game from two sides: as an independent game and as a representative of the RR series:

Ridge Racer 64 is a rather unusual arcade race: 25 racing cars, one from each team, and 20 tracks, divided into 8 grand prix. I can not imagine how the developers managed to push so much content onto one cartridge! All cars are radically different from each other - before choosing a car you will have to think what is better: an unguided rocket or a slow, but slick car of the Pacman Racing team. The trails are just perfect - you will not soon forget the races on the mountain "serpentine", the city streets, the suburban freeways. The graphics are gorgeous, but only by the standards of the N64 - juicy colors, cute car models, beautiful trails. The music is very pleasant, but it quickly becomes boring - there are very few melodies.

Part of the series Ridge Racer

The only thing that reminds about the presence of RR in this game is Reiko Nagase-the virtual girl and the symbol of the RR series. Experienced players will immediately notice the huge differences in the gameplay: the main attraction of the series - a great drift turned into something chaotic and ugly, the cars behave "too arcade," the sense of speed is present only after a mark of 200 mph. After PS one, the graphics on N64 look pretty bad. Also things are with music.
‹
›
Home
View web version