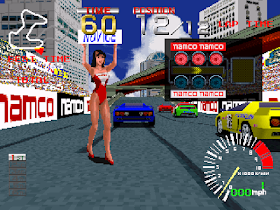 Genre: Racing / Driving
Perspective: 1st-person, Behind view
Gameplay: Arcade, Vehicle Simulator
Vehicular: Automobile, Track Racing
Published by: Namco Hometek Inc.
Developed by: Namco Limited
Released: 1995
Platforms: PlayStation (PSX, PS1), Nintendo 64 (N64)
Ridge Racer is an arcade driving simulator, similar to Daytona USA, where you can control one of the thirteen machines in the game along a circuit that can also be run in reverse. The videogame also introduces drifting, removed in the latest incarnations of the series. The player controls a red car belonging to the inexistent team "Team F / A" (referring to Fighter & Attacker of the same Namco) that faces the opposing teams whose names are inspired by arcade videogames such as Gaplus, Dig Dug, Mappy and Rally-X.
From a gameplay point of view Ridge Racer is the antithesis of the racing simulation par excellence, not for nothing that all the 3D driving videogames that came later can be divided into two categories: the realistic simulators at the Gran Turismo and the sport guides and disengaged, in fact, to Ridge Racer. The physical and dynamic unrealism of the Namco title is evident right from the first game: in fact it immediately hits the controlled skid that literally challenges every real physical law and, because of its "unrealisticity", manages to amuse the player and, at the same time, to improve the skid technique.
In short, Namco conceived this arcade as a carefree urban run in which there is no pretense to simulate the real physical behavior of the car to perfection. Another aspect of Ridge Racer's gameplay that appealed to the gamer was the feeling of speed you felt while driving your own virtual car. No other game before it had been able to give such a realistic illusion of high speed and this is due to a smooth and constant scrolling at 60 FPS, even in the most agitated game situations. Other typical features of this video game and its sequels are the background music composed of mix of techno, rave, jungle and dance, and the voice that comments on our driving performance during the game.
‹
›
Home
View web version