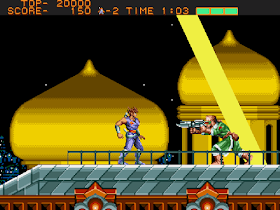 Genre: Action
Perspective: Side view
Visual: 2D scrolling
Gameplay: Platform
Setting: Sci-Fi / Futuristic
Published by: SEGA of America
Developed by: Capcom Co.
Released: 1990
Platforms: SEGA Genesis / Mega Drive, PlayStation (PSX, PS1), Arcade Machine
Funny arcade game about the Ninja. It used quite a lot of interesting technologies. The sequel of this game was the game Journey From Darkness: Strider Returns. In 2048, Strider is in a gloomy future, where a mysterious dictator known as the "Grandmaster" rules the whole world. Hiryu is the youngest member of the high-tech organization in the ninja, agents known as the "Striders" (Paladi). He is entrusted with the liquidation of the "Grandmaster". To begin his difficult task he will be in the Kazakh Soviet Socialist Republic. The main weapon of our ninja will be a plasma sword better known as Cypher. Hiryu can do a variety of acrobatic stunts that many ninjas can envy. It all depends on the player's skill. Also, you can collect a variety of bonuses, they will improve the range of attack or give something else equally useful. There are five levels in the game.
‹
›
Home
View web version