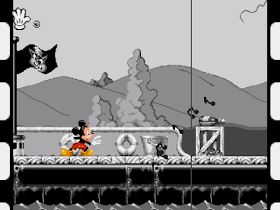 1928. This is the first cartoon with Mickey, please note that Mickey's old style is not much different from the image that we are used to seeing. At the beginning of the stage, you will immediately get an opportunity to compare which of the mice is better. This stage is the only one almost entirely black and white, but as it passes, it will acquire color shades. At the end of the stage you will meet with Pete, and fight the boss. The boss is a box, throwing off bombs, and sometimes a springboard. Your task: to cut down four gears, leading the boxes into motion. After the victory you will once again see the black and white Mickey.

1933. Mickey will visit the castle of the Mad Doctor, populated by animated skeletons and bats. During this level you will ride on a trolley, escape from rolling barrels and fight with the owner of the castle. Please note that towards the end of the music will be slightly reminiscent of "X-Files". At this stage, another Mickey is also there to see him, just leave the elevator after stopping it and go back, at the same time and earn a living. A little further you will have the opportunity to play with flowers. At your disposal there will be a flask and three colors: blue, red and green. When mixed, they give different shades - try it! (Something similar is in Toy Story 2). At the end of the stage you will meet Pluto.

1937. During the level you will be accompanied by Pluto and moose, from which in the end you will have to run. Escape from the moose is performed in combination of three- and 2D graphics. Another embodiment of the mouse here, too, is - pay attention to the bush on stilts.

1937. At this stage, Mickey, along with Pluto will visit the mansion with ghosts. You will ride on a raft and wander in the dark. And, of course, you will get acquainted with a bunch of ghosts, be attentive: the steps in this house have the feature of disappearing and turning into an inclined surface. At the end of the level, you will ride a barrel, chasing a ghost on a motor boat, and meet Mickey, beating his head against the wall in search of an exit.

1947. At this stage, Pluto will be with you again. The main task of this stage is the cultivation of various plants, so as to help them to get somewhere higher. The stage is inhabited by various insects, which are twice as big as a mouse. You will visit the green undergrowth and underground. Under the earth, Mickey will inadvertently wake a large spider and arrange a derby on a beetle. Running away from the spider, you can get into the bonus. To do this, climb up the bean sprouts upward, push the beetle 2 times and pull the lever. Now jump on the butterflies to the left - find life and the entrance to the bonus. The bonus is another cartoon - The Concert (The Band Concert, filmed in 1935). Mickey has to climb the boxes flying in the middle of a whirlwind, and meet with Mickey the conductor. If everything works out, you will get "Continue" and return to the fifth stage. At the end of the stage, you'll wander around the kitchen a bit and meet Mickey sitting on a bottle of champagne.

The Prince and the Pauper

1990. The last stage takes place in the castle of Pita. In the first part of the stage you will be able to ride on the chandeliers, jump on books and meet with Mickey-beggar. In the second part of the stage you will meet Mickey the prince, slip between the sliding walls and learn how to run away from the rising lava, instead of barrels, you will roll spiked balls. A little further you have to jump on the platforms, running away from the fire, simultaneously killing enemies. This is one of the places where you have to sweat pretty much. At the end of the stage you will find the final boss - Pete Knight. Deal with him will not be difficult, just move the spikes to the place of his landing, and then beat him with a large copper ball.

The graphics in the game are simply gorgeous. Each character is well drawn, the backgrounds on which the action takes place look exactly the same as in the original cartoons. Some backgrounds move in parallel with your character. In general, there is absolutely no claim to the schedule, as it is made by professional artists from the Disney company. Throughout the game you will constantly compare Mickey Mouse of different years of release with the one we have the honor to see now. In general, it is very original.

A variety of opponents, various obstacles. A special atmosphere is given to him by music, different at each stage. It creates some magical atmosphere that can not be conveyed by words. It corresponds to the stage environment or speed of action. In addition, Mickey himself, too, will often often say short but alive remarks, familiar and understandable to the entire English-speaking population of the planet.

Control will not cause any difficulties, since very few buttons are used. The game does not have a particularly high complexity. There is no need to puzzle over the question "What to do next?" Or to devise a sophisticated way of killing a new enemy. There are, of course, moments that cause the player to strain, but they appear closer to the end. Still, the game is designed primarily for children, and only then for everyone else.

On the consoles there are three ports of this game: Genesis, SNES and PSOne. In terms of animation, the best version is Sony, the worst version is the SNES version. In this article, I told about the version on Sego, because it is the golden mean between these games. In general, if you liked this game, be sure to play the version for the first Sonya, there are a lot of extra bonuses.

In order to be able to choose any level of the game, go to the settings of sound effects. Set "Music" to "Continue", "FX" to "Appear," and "Speech" to "Think." Place the cursor on the "Exit" and hold Left button for about 5 seconds - until you hear a sound confirmation of the correctness of your actions. Before the game starts, a line appears with the level selection.
‹
›
Home
View web version