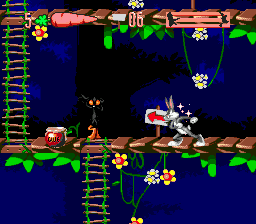 Genre: Action
Perspective: Side view
Visual: 2D scrolling
Gameplay: Platform
Published by: SEGA Enterprises Ltd.
Developed by: Probe Entertainment, Atod AB
Released: 1996
Platform: SEGA Genesis / Mega Drive
Rabbit Bugs Bunny has a dream in which Unguided Sam creates a robot monster called Gossamer and that suddenly goes out of control. Now Bugs Bunny should stop him.The game is a platformer with side-side scrolling and 2D graphics with elements of a 3D perspective and consists of several levels (forest, dungeon, knight's castle). According to the graphic design the game is similar to a series of Looney Tunes cartoons.The game process is as follows. Rabbit Bugs Bunny moves on a level where enemies and useful objects are located and performs a task. For example, at the level of Duck! Rabbit, Duck! You need to escort another character, Daffy Duck, escaping from hunter Elmer Fudd, to a safe place.The game also has logical elements. At one of the levels - Bully for Bugs - you need to use dynamite to release the passage to the next level, and on the other - to open the partitions with the help of levers.Useful objects in the game are quite diverse. A small carrot restores the character's health, a big one - gives an extra life, the watch slows down the time, the shoes allow you to move quickly, and a bottle with a certain liquid provides temporary invulnerability. Some items help in passing - for example, a pot of glue for a while immobilizes the haunting hero Daffy Duck. Also there are special items, without which you can not complete the level.

Duck! Rabbit, Duck! - a forest consisting of two sublevels. According to the story, Bugs Bunny and Duffy Duck escape from the hunter. The essence of the level is that heroes need to go through a limited number of "points" marked by their images within a limited time. But Bugs must not leave Duffy behind him. The level is considered passed if both heroes have passed all the "points".
Bully for Bugs - arena for bullfighting. Bugs Bunny should, using dynamite, open hatches on four sublevels, dodging attacks from a bull. With the help of the bull you can also get to the dynamite that is on top. Sub-levels are underground passages; The main task here is to find several items, the images of which are placed on the arena, trying not to fall into the hands of lions.
‹
›
Home
View web version