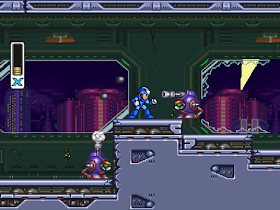 Genre: Action
Perspective: Side view
Art: Anime / Manga
Gameplay: Shooter
Setting: Sci-Fi / Futuristic
Published by: Capcom Entertainment
Developed by: Capcom Co.
Released: 1996
Platforms: Super Nintendo (SNES), PlayStation (PSX, PS1), SEGA Saturn
A qualitative and robust ending to the adventures of the glorious X-robot on the 16-bit console. According to the schedule and dynamics, the game surpasses the previous two parts, and there are plenty of innovations in it, so you will not be bored. Enemy mechanisms have become much more evil than before, they will have to fight with conscience. Bosses are also very powerful, and the main enemy will appear before you in such a strong incarnation, which you have not yet encountered. The number of secret capsules at levels has doubled. Also, if your blue robot is tired, you can call for help from the red partner, who will temporarily replace it (on the pause screen with the R button). Uncommon play from the X-series, which will not leave you indifferent.

The action of Mega Man X occurs indefinitely during the 22nd century (21XX year), all the Mavericks were neutralized due to the efforts of Dr. Doppler. The use of his Neurocomputer was able to suppress any abnormal behavior in the Refloids and prevent them from frenzy. Many of the most advanced of the Platoids gathered near their new mentor, who founded the town of Doppl. Going with Dr. Doppler, the Refloids were ready to enter a new golden era.
A few months later, the Mavericks, which were to be neutralized by the Neurocomputer, unexpectedly appeared and began to rebel. At the headquarters of the Hunter on the Mavericks, all the intelligence showed that Dr. Doppler was the mastermind behind the invasion. Soon, X and Zero took the challenge to destroy the invading Mavericks and bring Dr. Doppler to justice.
A few hours later, an emergency contact occurred at the Hunter's headquarters at the Mavericks, which are under attack from Doppler's power. X and Zero immediately returned to the base to stop them.
After defeating the Mavericks at headquarters, X and Zero fought against the Mavericks around the city of Doppl. Analyzing the vanquished Mavericks, Dr. Kane pinpointed the hidden Doppler laboratory. When X collided with Doppler and defeated him, he learned that Doppler was not responsible for Sigma's rebellion. Doppler was infected and created a powerful new organ for Sigma called "Kaiser Sigma", which eventually was defeated by X. However, Sigma turns into a viral form (from Mega Man X2), chasing Ix, forcing him to try to possess his Body.
There are two finals of the game. They both show that Dr. Doppler has created a real antivirus. One final shows that Zero took the Doppler antivirus and used it with his saber, descending and causing Sigma's death blow. The second finale shows that if Zero wins and repairs (which includes getting Zero's Saber for X), then Dr. Doppler himself comes to the rescue, sacrificing himself to use the antivirus for Sigma.