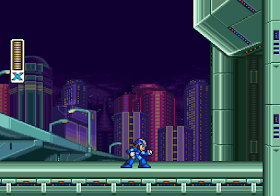 Gameplay Mega Man X3 is similar to the gameplay of previous games of the series and contains many elements, traditional for games of action genre and platformers. The player's task is to go through a number of levels, destroying enemies, gaining various improvements and special weapons after defeating the boss at the end of each location. As in the first two parts, the player can receive special abilities, finding additional pieces of armor. As in the two previous parts of the game, X can find bonuses such as "Heart-Banks" to extend the maximum life span and batteries to store energy for later use. If you have Zero mode selected, you can not collect bonuses.

The action of Mega Man X occurs indefinitely during the 22nd century (21XX year), all the Mavericks were neutralized due to the efforts of Dr. Doppler. The use of his Neurocomputer was able to suppress any abnormal behavior in the Platoids and prevent them from frenzy. Many of the most advanced of the Platoids gathered near their new mentor, who founded the town of Doppl. Heading with Dr. Doppler, the Refloids were ready to enter a new golden era.
A few months later, the Mavericks, which were to be neutralized by the Neurocomputer, unexpectedly appeared and began to rebel. At the Hunter's headquarters at the Mavericks, all intelligence showed that Dr. Doppler was the mastermind behind the invasion. Soon, X and Zero accepted the challenge to destroy the invading Mavericks and bring Dr. Doppler to justice.
A few hours later, an emergency contact occurred at the Hunter's headquarters at the Mavericks, which are under attack from the power of Doppler. X and Zero immediately returned to the base to stop them.
After defeating the Mavericks at headquarters, X and Zero fought against the Mavericks around the town of Doppl. Analyzing the vanquished Mavericks, Dr. Kane pinpointed the hidden laboratory of Doppler. When X collided with Doppler and defeated him, he learned that Doppler was not responsible for Sigma's rebellion. Doppler was infected and created a powerful new organ for Sigma called "Kaiser Sigma", which eventually was defeated by X. However, Sigma turns into a viral form (from Mega Man X2), chasing Ix, forcing him to try to possess his Body.
There are two finals of the game. They both show that Dr. Doppler created a real antivirus. One final shows that Zero took the Doppler antivirus and used it with his saber, descending and causing Sigma's death blow. Second final if Zero was out of the game, then Dr. Doppler himself comes to the rescue, sacrificing himself to use the antivirus for Sigma.
‹
›
Home
View web version